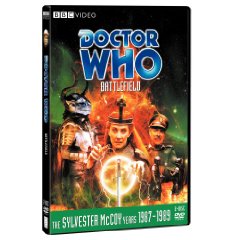 A story that has a lot of potential, but comes up wanting and is the weakest of the final season of classic “Who.”

With “Battlefield,” BBC Video and 2|Entertain mark the first full season release for classic “Doctor Who” that isn’t a box-set (as were “Key to Time” and “The Trial of a Time Lord”).   The fact that the first full season to come to DVD from the classic era is not only the last produced but also from the Sylvester McCoy era is an interesting one as I’d have bet you money a decade or so ago when “Who” first started hitting DVD that we’d get a Tom Baker season as the first complete season released onto the DVD format.

Aired as the first story from the classic series’ final season, “Battlefield” comes from the pen of Ben Aaronovich, who the season before penned the instant classic, “Remembrance of the Daleks.”   It was under these lofty expectations that I approached the story when I first saw in 1989 and came away disappointed.  Subsequent viewings and the BBC Video release with an extended cut of the story helped a bit, but I’ve still never been able to get over the fact that “Battlefield” is no where nearly as good as “Remembrance.”

The story is set in the near-future and mixes in heavy helpings of the King Arthur legend with some old “Doctor Who” staples including UNIT, a return appearance by Brigadier Lethbridge-Stewart and the Doctor having to save the world from utter destruction (yet again).   The Doctor is drawn into the events by his former association with UNIT and the fact that aliens from another dimension all seem to think he’s Merlin (there are broad hints that a future version of the Doctor will be Merlin, something I’d love to see the new series delve into a bit).   As with another McCoy story from this era, “The Curse of Fenric,” “Battlefield” comes as a two disc set with two versions of the story.  On the first disc is the original, broadcast version and on the second is an extended cut in movie format that features some consolidation of scenes, updated effects and Dolby sound and a few extended scenes.

Of the two stories, the original episodic version is preferred by this reviewer but that shouldn’t keep you away from the special edition.  Just don’t go in expecting any major differences between the two.  Neither edition is what I’d call great “Doctor Who,” simply because “Battlefield” isn’t one of the classic stories of its era.   There are some great moments, including the Brigadier meeting Ace for the first time and the costume for the Destroyer in episode four.  But there are several instances of padding to run the storyline out to four episodes and some hammy performances by everyone involved, including the regulars of McCoy and Sophie Aldred.  Two scenes in particular–Ace yelling “Boom!” over and over again in the waning moments of episode one and the Doctor saying “There..will..be..no…battle..HERE!”–still make me cringe as much as they did 20-odd years ago upon first viewing.   McCoy defends the acting choice in one of the documentaried on the story  and while it helps to see what he was trying to achieve, it still doesn’t make the scene any less cringe-inducing.

It’s the extras that are the real selling feature of this particular release, including a long look at the development of and making of this story.  For those who weren’t fans in 1989 when this was made, “Battlefield” was a story that was supposed to kill off UNIT favorite, Brigadier Lethbridge-Stewart.   However, a last-minute change of heart by the production team lead to this not happening and that decision is discussed in detail.   The disc also includes a commentary by script-writer Aaronovich, actors Nicholas Courtney and Aldred and script-editor Andrew Cartmel.   This, taken along with the documentaries, offer a look into the production and development of the story that will help you see what the story was trying to do and how it hit the mark in many ways, but missed the mark in others.  As with all classic “Who,” the observations are fairly open, frank and honest, something that is missing from the releases for the current show (partly becuase not enough time has passed for a frank examination of what works and what doesn’t).

Also, given producer John Nathan-Turner’s penchant for keeping as much stock footage from each story produced in his era as possible, there are a wealth of other extras on the disc.  One examines the story of how Sophie Aldred nearly drowned filming a particular effects seqeunces from the second episode–including the original studio footage of the incident.  Fans will also find a 19-minute look at some original, uncut studio footage that includes some alternate takes and moments cut from the final broadcast.   If you’re a long time “Who” fan, these two will be of great value and interest.

The disc also features a documentary on actress Jean Marsh’s involvement with “Doctor Who.”  The actress guest-starred on “Who” three times–twice during the William Hartnell era and then, obviously, here.   Marsh is on hand for the documentary (as well as others devoted to the story) and it’s nice to see her given her due for her place in the series’ history.

All the extras led to a re-examination of “Battlefield” and while it’s easier to see what they were trying to do, the results on-screen speak for themselves.  It’s a story that has a lot of potential and could have been a classic.  However, in the execution, the story comes up a bit short.