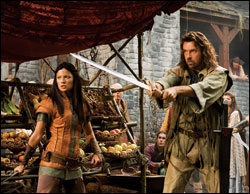 Despite its penchant for canceling series in their prime and cheesy in-house genre films, one compliment you could pay the SciFi Channel is they offered good mini-series.  From the original “Battlestar Galactica” mini-series to the adaptations of the first three “Dune” novels to “Tin Man,” the SciFi mini-series have always been an event worth looking forward to.

Unfortunately, “Knights of Bloodsteel” is a mini-series that belongs more as a SciFi Saturday feature than it does as a mini-series event for the cable network.

In the world of Mirabilis, the population is dependent on a rare element called bloodsteel.   Bloodsteel is an element that is the source of all magical power on the world and is slowly running out.  Evil forces, led by the powerful Dragon Eye, are drawing near and want to take control of all the bloodsteel left on the planet and also to gain control of a potential magical source of the rare element.  An ancient prophecy says that four warriors will emerge and challenge the forces of evil.  This happens and it becomes an epic race against time to get to the magical source before the forces of evil seize it and control it forever.

As a premise, “Knights of Bloodsteel” isn’t exactly a new one when it comes to epic fantasy.   The problem isn’t that the script isn’t offering any new take on the classic tropes of the fantasy genre.  It’s that the entire production is a muddled, confusing mess that tests the patience.   You’ll know things are bad when there’s a quick prologue to start the first part of the story-think of it as a “this is the story until now” portion of other shows.   It reminds me a lot of hearing Michael Stackpole’s rants about prologues on “Cover to Cover”:  If you can’t figure out a way to get the information to your audience with a huge info-dump prologue, you probably need to consider another edit.

It’s all downhill from there.  The story is confusing from the get-go and the execution is furtive at best.  It almost feels like the story is there simply to serve as set-up for the epic sword and sorcery battles within the two-night story.   The series is visually stunning and does feature some great make-up work and effects.

It all adds up to a miniseries with an interesting idea but one that fails completely in the execution.