The most enjoyable of the “Doctor Who” specials produced to date 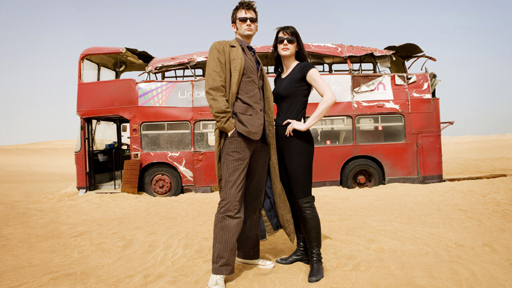 “Doctor Who” holiday specials are meant to be one thing–pure, simple fun. They’re meant to be a nice way to relax and spend some time with an old friend during the holiday season.

So far, we’ve had four Christmas specials that have been all over the map in terms of quality. Part of the problem with each one is they’ve all suffered from extraordinary levels of padding. Even the best of the lot, “The Christmas Invasion” suffers from long periods as we wait for the Doctor to recover from the after-effects of re-generation.

And while “Planet of the Dead” does have some padding to round it out to a full hour, it’s not nearly as bloated as this year’s Christmas special, “The Next Doctor.” A lot of this could be credited to the collaborative script-writing efforts of Russell T. Davies and Garth Roberts. With two writer working on the story, we get a tighter script and a better story.

It’s still harmless, good-natured fun, but at least it kept my interest for the entire hour-long story.

The premise is simple enough. The Doctor meets single-episode companion Lady Christina, played by Michelle Ryan, on-board a double-decker bus. Lady Christina is a cat burglar who has just made off with a valuable gold artifact. The bus and its half-dozen or so passengers falls through a wormhole onto a deserted planet where an alien race is coming that could destroy Earth. The Doctor must race against time to return to Earth and seal the wormhole before Earth is destroyed.

The story is simple enough and has moments that feel like classic “Who.” The larger budget of the new series is evident from the scenes on the desert-world. If this were old-school “Who” we’d be in a quarry. But with the larger budget, we’re transported to the deserts of Dubai. It’s a lot more visually interesting.

Unlike the previous Christmas specials, “Planet of the Dead” has events that don’t revolve around the Easter time period in which it airs. This is a particular strength for the episode. A passing reference to Easter is made early on, almost reminiscent of the first Doctor wishing viewers at home a “Merry Christmas” back in the 60’s and then the story barrels forward.

What we get is a kind of a greatest hits of a lot of what makes “Doctor Who” well. There are a lot of elements from other stories here including the small band of survivors, the mysterious woman who appears in the Doctor’s life, an alien threat to Earth and the presence of UNIT.

As an old-school fan of UNIT, I like that we see the military group portrayed on-screen with more than two soldiers to fight off an invasion. But part of what made UNIT work in the 70s was that there were recurring characters for the audience to identify. The UNIT of this era lacks that–and I think it’s something the show needs. It might be nice to see some group of people from UNIT who aren’t awed by the fact that they’re working with/meeting the Doctor.

The story moves from plot point to plot point with concepts and ideas flowing naturally from within the story itself. The script earns its resolution by putting the pieces into play early in the story–something I can’t say for “The Next Doctor.” Also, there isn’t a moment where a giant Cyber-transformer rises from the Thames and we all get to roll our eyes. For that alone, “Planet of the Dead” is light-years ahead of what we got at Christmas.

And we get some hints of what’s to come for the Doctor. A hint that echoes what the Ood told the Doctor in “Planet of the Ood” about his song coming to end works well and peaks the interest for the next three installments this year. Of course, since most of us know about a certain cast change, this won’t be a huge SPOILER, but it’s still a nice hint and enough to keep audience interest during this year’s limited run of “Doctor Who.”

For what it is, “Planet of the Dead” is the most enjoyable of the “Doctor Who” specials produced to date. If the rest of the offerings in 2009 can achieve this same level, we’ll be in for a solid year as we say farewell to the tenth Doctor.