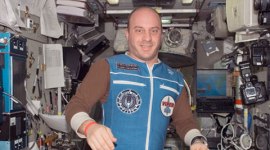 Unless you’re one of those Moon-landing conspiracy nuts of the last 40 years, then when one thinks of NASA astronauts, generally science fiction is not what comes next in the thought process, however, several famous astronauts who have lived and worked in the real world located beyond Earth’s boundry have appeared in a few fan-fav sci-fi shows and films. Case in point would be the series finale of Battlestar Galactica (BSG) that just aired over the past week.

Astronaut Garrett Reisman spent a full three months living in space aboard the International Space Station (ISS), but one of the greatest thrills of his life was donning the uniform of a Colonial Marine for the 2-hr finale of BSG. He was able to watch the show while aboard the ISS via a computer station download. The astronaut even got to speak with show producers Ron Moore and David Eick from the ISS during his three-month tour. Reismann had only been back to Earth for a little over two weeks when he was asked by Moore to be apart of the crew of Galactica for its final days of shooting.

“The whole spaceflight thing was still very fresh,” Reisman recalled to SPACE.com in a recent interview. “And then to be on the set where they’re simulating it, it was pretty neat to experience.”

Reisman, a big fan of the original 1970’s series, as well as an avid viewer of Ron Moore’s incarnation, says he was thrilled to be asked to participate in such a groundbreaking production. “I had so much fun that day,” said Reisman. 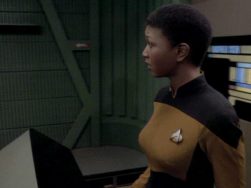 Other real space alum have had their share of camera time over the years. The most famous would have to be Mae Carol Jemison, MD. She has the distinction of being the first real astronaut to ever appear in a Star Trek series. She starred as a Lt. Palmer for the “Star Trek: The Next Generation” episode titled “Second Chances”. Current ISS commander Michael Fincke, along with fellow astronaut Terry Virts, appeared on the infamous series finale of “Star Trek: Enterprise”. Fincke appeared as one of Tripp’s engineers and was given a speaking part as well. Both men were long-time fans of the entire Star Trek franchise and give the show credit for their desire to entire the NASA space program. 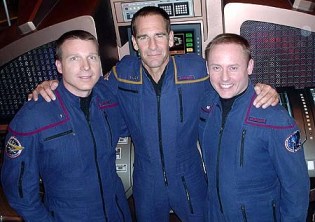 Some of the original NASA astronauts have also been apart of sci-fi history over the last four or five decades. Apollo astronauts Buzz Aldrin and Alan Bean were an integral part of the Star Trek 40th Anniversary celebrations in 2006.

Some sci-fi actors have also gotten to contribute to the real space-flight scene as well. Star Trek’s Uhura, played by actress Nichelle Nichols, continues as a spokesperson for NASA and was instrumental in making sure the NASA astronaut team was not just an all-white-men’s club. During her nearly 40 year association with the space agency Nichols is responsible for inspiring people of color and females in joining the ranks of NASA’s illustrious astronaut core. Before his death James Doohan, who played engineer Montgomery “Scotty” Scott in the original Star Trek series, was instrumental in recruiting young, fresh-minded NASA engineers for the agency.

One thing most all astronauts have in common is their love of science fiction and “space-operas”, especially those that treat contemporary issues in their stories, and those, like Star Trek, that inspire future generations to put no limits on their imaginations and encourages them to excel in the sciences.