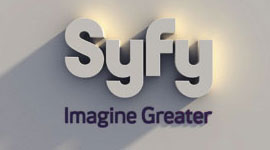 The SciFi Channel is changing its name. Starting later this year, the cable network will change its name to Syfy according to the Hollywood Reporter.

The new name is part of a rebranding campaign that has been in development for the past year. The rebranding will include a new logo and tag-line for the network, “Imagine Greater.”

The changes attempt to address some longtime marketing goals at the network, as well as some practical challenges that having stemmed from trying to use a generic term as a brand name.

“We love being sci fi and we’re still embracing that,” said network president Dave Howe on Friday. “But we’re more than just space and aliens and the future – the three things most people think of when they think of ‘sci fi.'”

Though at first blush more fantastical-looking than the current name, SyFy aims to telegraph that the channel is unique destination without being so different from the current title as to lose the network’s core familiarity.

“What this does is hopefully give us the best of both worlds,” Howe said. “You keep the heritage, but also open up to a broader range of content.”

Sci Fi’s logo is also getting a makeover. The current purple Saturn image will be retired. In its place is the name SyFy raised against a light-taupe wall. While the tagline “Imagine Greater” prods the reader to reconsider the boundaries of the channel and pushes inspirational liftoff.

No word yet on if the new catchphrase “Imagine Greater” will lead to better quality SciFi Saturday films….