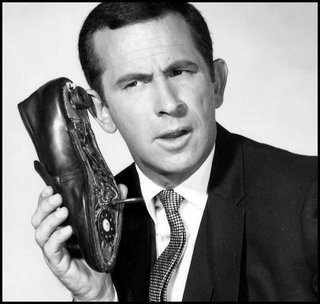 Would you believe that a fan of the original TV series, “Get Smart” has created a working dome of silence?

How about that a fan of the show has created a working shoe phone?

Australian IT expert Paul Gardner-Stephen has created the shoe-phone with the help of shoe-maker friend. A mobile handset fitted in one heel and a Bluetooth headset in the other allows users to make and receive calls simply by sliding back each heel to operate the gadgets.

Although using the phone would require an astonishing degree of flexibility – or the removal of said shoes – Gardner-Stephen is convinced his idea will catch on.

“Your first thought is, ‘It’s completely impractical.’ But it’s actually not that bad.” he said.

“The phone rings, you slip off the shoe then you open the heel, press the button and you’re talking in around the same time it would take to fumble in a bag and pull one out.”

He originally created the phone as a prop for a local theatre production of the television series “Get Smart”. But his idea has generated so much interest that he is now thinking of marketing it online.

He also considering developing a spin-off medical version complete with equipment for measuring pulse, blood pressure and other medical information could be stored in shoes. It could also be adapted to house an alarm to alert carers if an elderly person falls ill at home.

He said he had road-tested the gadget himself over three days at Adelaide’s Flinders University.

“I’ve had a couple of bemused looks. But I walked several hundred metres outside talking into the shoe and no one really paid much attention,” he said.