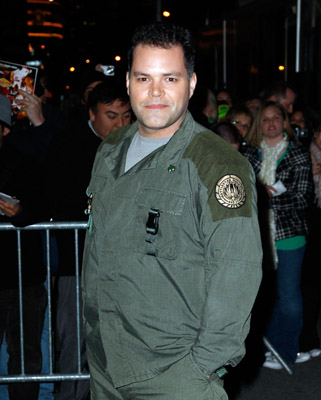 Review: Taking a look at Keanu Reeves’ “The Day the Earth Stood Still.”

Slice of Trivia: This week Kurt in St. George proves that made for TV sci-fi films don’t have to be SciFi Saturday with three new clips. Email your clips to Kurt at sliceoftrivia at gmail.com. Your entries could get picked and played on the show.

TV Talk: Joss Whedon says those who have written off “Dollhouse” as D.O.A. need to give the show a chance.

Interview: This week, we talk to Aaron Douglas who plays Chief Tyrol on SciFi’s “Battlestar Galactica.” Aaron will be in Phoenix in a few weeks for Phoenix Cactus Comicon. He also talks about the history of his character and his approach to playing Chief Tyrol.

Krazy Joe’s Punch in the Junk: Krazy Joe’s first punch of 2009 goes to the decision makers at D.C. Comics.

Link: BBC Article: The First Scientist
Promo: How To Grow Your Geek