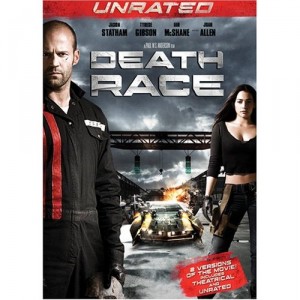 Big engines, big action and big testosterone fuel Paul W.S. Anderson’s latest, and arguably one of his most enjoyable cinematic offerings yet. Sure the Jason Statham actioner plays by conventional cinematic rules, but like the attraction of the race itself, “Death Race” is all about the spectacle.

Former professional racer turned dockworker Jensen Ames (Jason Statham) has been falsely accused of murdering his family. Sentenced to a life of imprisonment at Terminal Island, Ames is pressured to compete in a televised street race, where the last man standing is granted freedom.

Simple yet effective, the remake of the schlocky Roger Corman pic is packed with action from its aggressive opening to its somewhat predictable, but wholly entertaining finale. The magnum opus of stuff blowing up? A semi-truck equipped like a battle tank flipping over, a stunt that would have been awe inspiring if “The Dark Knight” hadn’t accomplished something similar a month prior to its theatrical release.

Though “Death Race” may seem like mindless entertainment upfront, the fact that it takes place four years in the future, after a fictional economic collapse, and features jabs at the excesses of reality television, it seems a Paul W.S. Anderson flick might actually carry some social relevance.

Now on DVD and BluRay, “Death Race” looks and sounds spectacular, but the extras are rather minimal. Aside from an interesting special feature about stunts, and Anderson’s moderate commentary, there’s not too much offered on Death Race. While it might not set the world on fire, Anderson’s latest is one vehicle action fans should give a test drive.

Buy the DVD
Buy the Blu-Ray