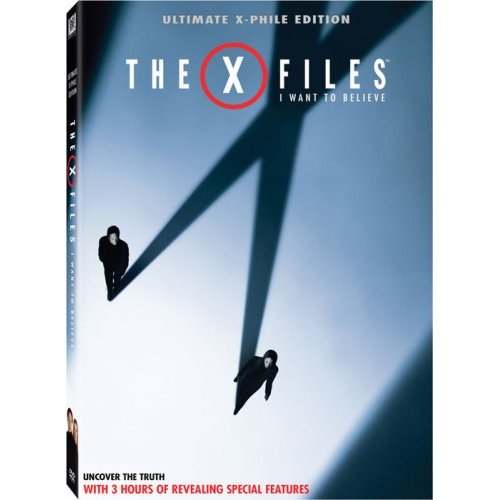 When it comes to movies and whether or not they’re financially successful, timing is everything.

This summer, “The X-Files: I Want to Believe” was a victim of timing. It opened the weekend after a little movie called “The Dark Knight” hit theaters, sending the world into a Batman-induced frenzy that should only get bigger when the movie hits DVD and Blu Ray next week. The frenzy over Batman meant that the long-awaited big-screen reunion of Fox Mulder and Dana Scully got lost in the shuffle as movie-goers hit theaters to see Christian Bale battle Heath Ledger for second, third or even fourth time.

I expect a good majority of people are going to be discovering “I Want to Believe” for the first time on DVD and Blu-Ray. And those who do are in for a treat.

In fact, I’ll even go so far as to say that the intimacy of a home theater actually works better for enjoying a movie like “I Want to Believe.” The ability to rewind the movie and catch the multitude of visual Easter Eggs (long a staple of the original series) will only enhance the viewing of the latest offering featuring Mulder and Scully.

Let me preface this by saying that I was (and still am) an absolute die-hard fan of “The X-Files.” When the show was on the top of its game, it was among the best drama television has ever produced. The early episodes inspired such a zeal in me that I can say I’ve seen every episode of the show, even sitting through the show’s final two rocky seasons.

So, when it came to seeing a new big-screen adventure of Mulder and Scully I was both excited and hesitant. Could the movie live-up to the standard the series sent when it was at its zenith in seasons one through five?

“The X-Files: I Want to Believe” is, at its core, an extended X-Files episode.Â  And not one of the sweeps-event, arc-heavy alien invasion story lines featuring the Byzantine-like mythology.Â  It’s a monster of the week story that has a sci-fi connection, but is really more concerned about the dynamic between Mulder and Scully and not about alien invasions or supernatural occurances.

The script by Chris Carter and Frank Spotnitz wisely goes for a balance of being accessible to the average movie-goer and having enough connections to the series to reward long time viewers. As I said before, watch closely because you’re likely to see and hear a lot of connections to the series, as well as see a variety of familiar faces in blink and you’ll miss it kind of roles. (I have a feeling those of you with Blu-Ray players and larger HD sets are going to love that aspect of it).

The story picks up six years after the final episode of “The X-Files” and involves a case where an FBI agent has been kidnapped. Special Agent Dakota Whitney (Peet) brings in a former Catholic priest and convicted pedophile (Connolly) to help look into the case. Her partner is skeptical of the priest’s “ability” and Whitney seeks out the help of Fox Mulder (Duchonvy), who has been in hiding since going on the lam several years before. The only connection is via Dana Scully (Anderson) who has gone back to practicing medicine and faces a crisis in trying to heal a young boy with a rare disease.

Whitney dangles a full pardon for Mulder if he can come in and help solve the case. Before long Mulder and Scully are togther again with Mulder showing his obsessive tendencies when it comes to investigating crimes that may have a supernatural angle. This time it’s not the kidnappings themselves, but the potential pyschic powers that Connolly’s Father Joe may or may not have.

What the movie does well is set up the conflict and the dynamic between Mulder and Scully. And Duchonvy and Anderson easily slip back into their old roles as the two agents, but do so in a way that it still feels fresh and new. Seeing where Mulder and Scully have been all these years is fascinating and long-time fans of the series will enjoy hearing the banter between these two again. Whether or not you’ll like where they are in terms of the romantic relationship will probably depend on whether you were a “shipper” or “non-shipper” during the series run.

“The X-Files: I Want to Believe” comes to DVD and Blu Ray (the DVD was used for the purposes of this review), looking and sounding fantastic. It’s also packed with extras. The two-disc DVD set comes with two versions of the movie–the theatrical cut and the extended cut. The extended cut isn’t drastically different that what we saw in theater, but it does have some interesting additions. It’s not exactly “Lord of the Rings” type of extended cut, but it’s still worth a viewing. Especially if you want to hear the full commentary by Chris Carter and Frank Spotnitz. The commentary by these two is easily the highlight of the extras, as the duo talks frankly about getting the movie made, the creative process and help point out the various Easter Eggs cropping up on screen. I will admit I’ve not been a huge fan of Carter’s commentaries in the past, feeling that he can be a bit self-indulgent in praising himself. Here he’s still got that streak, but it’s held in check by Spotnitz and the entire commentary is richer for it.

The first disc also includes three deleted scenes and various other extras like Carter’s announcing a new “X-Files” is headed to the big-screen andÂ a requiste blooper reel. The second disc is all one long extra that details the making of the movie in great detail. Broken down into three segments, “Trust No One: Can The X-Files Remain a Secret?” looks at the making of the film, the campaign to keep audiences in the dark on the plot of the movie (which Carter did very successfully) and the post-production of the film. It’s a fascinating look at the production and will be very rewarding for X-Philes and movie-fans.

The third disc (which wasn’t provided for review purposes) contains a digital copy of the film.

All in all, “The X-Files: I Want to Believe” is a nice addition to the X-Files universe and a movie that I found improved a great deal on a second viewing. I saw it in theaters and came away feeling so, so about it but after seeing it again at home, on DVD, I found the movie a far richer experience. It’s certainly not quite the nirvana-like state that we got when the series was at its peak in season three but it’s still a great chance to catch up with Mulder and Scully and a far more satisfying potential end to the show than the series finale.

You can buy a one disc or three disc DVD set or a two disc Blu-Ray set or the Blu-Ray set of both “X-Files” movies.