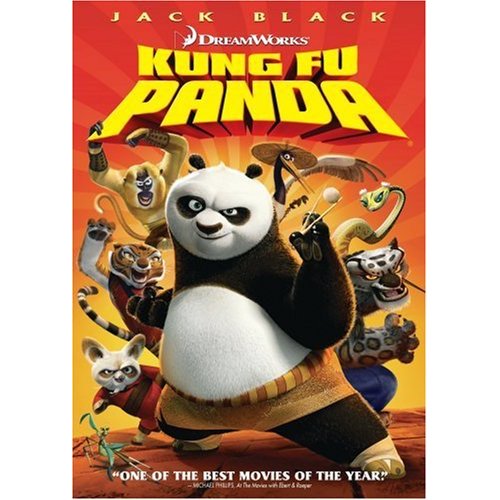 Skadooooosh! Kung Fu Panda won’t be bound to the mediocrity of the Dreamworks Animation library, it uses originality and visual dazzle to karate chop its way to success. A comedic and eye popping endeavor, Kung Fu Panda mixes the fun of martial arts with the limitless possibilities computer animation has to offer, delivering a completely satisfying, if somewhat uneven, animated endeavor.

After a wise kung fu master names Po (Jack Black) the legendary Dragon Warrior, the rotund panda must learn the way of martial arts to save the village from the villainous Tai Lung. With the reluctant help of renowned instructor, Shifu (Dustin Hoffman), and his legendary Furious Five, they must prepare Po to become the warrior fate has chosen him to be.

Epic martial arts films have recently taken a trend of showcasing the impossible through extensive wirework. Kung Fu Panda improves upon this by freeing filmmakers, Jonathan Aibel and Glenn Berger’s imaginations. Thanks to a breakthrough in computer animated technology, in which technicians found ways to bend the character models like never before, outstanding, death defying martial arts moves could be completed with the push of a button.

The film boasts an impressive amount of talent voicing the cast of characters, including the aforementioned Black and Hoffman, as well as Angelina Jolie, Seth Rogan, Jackie Chan and Lucy Liu, however Kung Fu Panda does something revolutionary for DreamWorks animated projects, their voices don’t blatantly stand out. Unlike Shrek or Madagascar, each actor truly became his or her character. While it was quite apparent that Jack Black was behind the voice of Po, it never became distracting as animators did a great job tailoring the actor to the build of the character.

The only real problem plaguing Kung Fu Panda is the picture’s uneven pace. The film is quite choppy, racing from quiet moments to frantically manic ones. This uneven nature might be distracting to adult audiences who expect even keeled storytelling over colorful razzle-dazzle.

Now on DVD, Kung Fu Panda comes home with an array of special features that are obviously aimed at youngsters. While a few of the behind the scenes peaks are filled with interesting animation, they are all too short to be substantial. A bonus film, The Secret of the Furious Five, is included with the feature at some retailers. This extension of the feature shows Po teaching young martial artists that there is more to Kung Fu then fighting. The somewhat entertaining, yet preachy short feels like a forced studio effort to pacify parent groups who are afraid their children will be punching and kicking everything in sight after the credits roll on Kung Fu Panda.

A hilarious and fun film, Kung Fu Panda succeeds far more then it falters. The delightful comedy should keep the whole family entertained, and the cinematic, eye-popping visuals surpass anything Dreamworks Animation has put out yet. It certainly stands out as the studio’s best effort yet.