“Casino Royale would have certainly put popular independent films like The Graduate and Easy Rider to shame in comparison to its sheer production value, but somewhere along the line this spy spoof forgot what makes movies so compelling in the first place, the story” 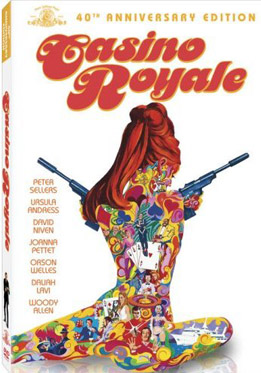 Near the end of the sixties, major changes started taking place in Hollywood. With the Production Code cracking and independent film flourishing, the studios had to try to offer audiences something that rogue filmmakers could not, all the pizazz that money can buy. “Casino Royale”, the estranged comedic cousin of the Bond cinematic legacy, is a perfect example of this desperate attempt to lure audiences back with Hollywood spectacle.

Loosely taking its plot cues from the Ian Fleming novel of the same name, Casino Royale pits James Bond (David Niven) with some familiar characters, such as the gambling terrorist, Le Chiffre (Orson Welles) and the dangerously gorgeous Vesper Lynd (Ursula Andress), but that’s about as far as the similarities go. Forced out of retirement to deal with Dr. Noah of SMERSH, the original James Bond deals with this new worldwide threat by recruiting secret agents to take up his name, including card expert Evelyn Tremble (Peter Sellers) and his nephew Jimmy Bond (Woody Allen), in hopes to shake up and confuse the underworld long enough to save the day.

Including some of the biggest actors of the time, huge, colorful set pieces, which house giant action and dance sequences, “Casino Royale” pulls out all the stops. Using nearly every cinematic technique available at the time, “Casino Royale” would have certainly put popular independent films like “The Graduate” and “Easy Rider” to shame in comparison to its sheer production value, but somewhere along the line this spy spoof forgot what makes movies so compelling in the first place, the story.

Perhaps the extremely disjointed film, which follows a very thin plotline already, becomes so chaotic due to the fact that six directors helmed different elements of the project. Certain filmmakers directed scenes with specific actors, which doesn’t include the countless uncredited writers who seemingly rewrote dialogue on the fly.

While the 40th Anniversary DVD does boast an excellent transfer, capturing all the color and grandeur of the sets, and some fun moments with some legendary actors, “Casino Royale” is a noble failure representing a last gasp of air from an older Hollywood Studio system.