Purchase and save 38% off SRP HERE.

“An impressive collection of Bond films, certainly designed to capitalize on the new direction that Casino Royale and Quantum of Solace are taking the franchise, five out of six do their best to fit this new mold” 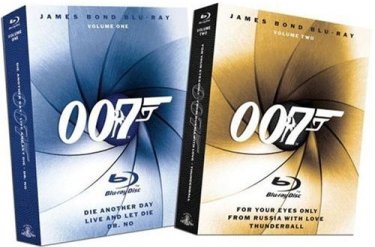 Bond was made for Blu. With the upcoming release of Quantum of Solace, Fox and MGM Home Entertainment have teamed up to capitalize on the James Bond fan base by doing something the titular character always does gracefully, embrace new technology.

The James Bond Blu-ray Collection Six-Pack is a great smorgasbord of titles sure to whet the appetites of audiences awaiting the upcoming, twenty-second Bond flick, but consumers beware these titles are merely parts of the James Bond Ultimate Edition DVDs released only two years ago. While the special features might still be the same, these fantastic discs, having already been stylishly remastered, are regurgitated in flawless beauty for high definition.

James Bond makes his cinematic debut, played by the charming, yet rugged Sean Connery in Dr. No. The tropical adventure pits Bond against the mysterious Dr. No, an evil genius bent on destroying the United States space program. The first Bond theatrical outing, Dr. No is perhaps the closest in tone to the 2006 smash, Casino Royale, as much of the soon to become trademark humor and camp had not yet been established, which should make the title easily digestible for fans introduced to the series by the Daniel Craig hit. Playing up the height of the Cold War, Sean Connery returns From Russia With Love. The title introduces SPECTRE, an organization of super villains that Bond would be squaring off with for over a decade. While not as memorable as Dr. No, the follow-up establishes James Bond films as thrill rides that take the hero around the globe, encountering beautiful women at every turn. Thunderball, one of my personal favorites in the series, had quite a bit to live up to as the follow-up to what many consider the unsurpassed James Bond film, Goldfinger. After successfully reigniting the franchise, director Guy Hamilton was replaced by series veteran Terence Young. Balancing his hard-nosed tone with the ever-increasing humor of the franchise, Young’s third James Bond picture retraced familiar territory as James Bond headed to the Caribbean to again take on SPECTRE. Featuring gorgeous underwater chases, with thrilling action on the surface, Thunderball is perhaps the most defining moment of Young’s involvement with the franchise. After a disappointing run with George Lazenby as James Bond, producer Albert R. Broccoli again enlisted the help of director Guy Hamilton and series icon Sean Connery with Diamonds are Forever. With the franchise again turned in a positive direction, Brocolli kept Hamilton on board for a much longer run, this time introducing the world to the true successor of Connery, Roger Moore.

One of the more serious Roger Moore Bonds, Live and Let Die pitted James Bond against black magic and a drug lord bent on taking over the world. Facing grizzly deaths and tense torture sequences, Moore proved that he had the charm, wit and physicality to take over the action franchise. Moore, the longest running James Bond, took the franchise into its third decade with For Your Eyes Only. Pulling the tone back from the unbelievably campy Moonraker, For Your Eyes Only gave veteran Bond Editor and 2nd Unit Director, John Glen, a crack at the franchise. The director took the opportunity and managed to stay at the helm through the eighties, directing five pictures, the most of any filmmaker in the series. The mission was simple enough, recover a stolen device capable of controlling a fleet of nuclear submarines, but the new tone allowed the franchise to continue its monstrous success. The last and most recent film included in the James Bond BluRay Collection Six-Pack is the twentieth entry into the series, Die Another Day. Starring Pierce Brosnan, Die Another Day represents everything that went wrong with Bond. While the headline actor was impeccably good as the British secret agent, the script couldn’t have been worse. Invisible cars, an ice palace, DNA alteration and weapons in space add up to an over the top 40th anniversary for Bond. Even homage to Dr. No, with the beautiful Halle Berry sporting the bikini that Ursula Andress made iconic couldn’t help this disaster. It’s no wonder that the studios, producers and fans called for a reboot. Why Die Another Day was apart of this new, specifically marketed collection is beyond me, but I suppose Fox and MGM had to move the title somehow.

An impressive collection of Bond films, certainly designed to capitalize on the new direction that Casino Royale and Quantum of Solace are taking the franchise, five out of six do their best to fit this new mold. While the special features match up to the previously released James Bond Ultimate Edition DVDs, the titles included in each volume do not; so don’t go getting rid of your old collections just yet.