“A fascinating look at an experiment gone wrong” 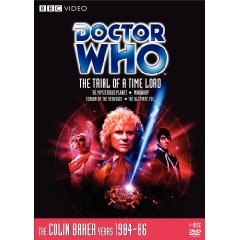 Returning from an 18-month BBC-management imposed hiatus, the 23rd season of “Doctor Who” had a lot to prove. Responding to worldwide fan outcry at the show’s being put on hiatus (and possibly cancelled), the BBC finally relented and returned the show to the airwaves, but at a price. The show had to make a few cuts, including the number of episodes produced per season.Â  The series was slashed from 26 episodes a year to 14 and given one season to restore the BBC’s faith in it.

In many ways, the series was on trial for it’s life. And as several of the special features on this DVD set will tell you, it was this idea that gave rise to the over-arcing theme for the good Doctor’s return. Script-editor Eric Saward decided to literally put the Doctor on trial for his life, an attempt to reflect fictionally what was happening in reality.

The result was the fourteen-part story, “The Trial of A Time Lord.” And while the season features some of Colin Baker’s best performances as the sixth Doctor, it doesn’t necessarily feature the strongest stories for the character.

Using the overarching theme of the Doctor on trial, Saward solicited stories that would look at the past, present and future of the Doctor with a final two-part serial to wrap things up.

In one of the most expensive (as the DVD extras repeatedly remind us) and spectacular model shots in the series long run, the season begins on a mysterious space-station where the Doctor must face a jury of his Time Lord peers. Put on trial for his meddling in the affairs of the universe with the court is presided over by the Inquistor play by Lynda Bellingham and prosecuted by the mysterious Valeyard, superbly realized by Michael Jayston. In order to show the extent of the Doctor’s crimes, the Valeyard chooses to show episodes from the Doctor’s past, present and future before a verdict can be delivered.

First up, we see the Doctor’s invovlement in the affairs of the planet Ravalox. Subtitled “The Mysterious Planet” and written by “Who” veteran Robert Holmes, the first four episodes have, at times, the feel of a classic “Who” serial. Ravaloox is exactly like Earth in every way, except that it’s 2 million light years off course, something which intrigues the Doctor. The Doctor’s attempts to investigate what has happened put him between two fueding groups on the planet–the underground dwellers of a mysterious city and the “Tribe of the Free” who live on the surface. Add to the mix the duo of Sabalom Glitz and his side-kick Dibber and you’ve got four episodes that work remarkably well, considering Holmes’ poor health at the time of writing. There are moments when “Mysterious Planet” will feel a lot like a “greatest hits” of other Holmes-penned stories, but given that this is the last full story we get from this master writer and it’s easy to forgive those shortcomings.

What’s not as easy to forgive is the way the segments in the courtroom interrup the flow of the story. Just as the audience is getting settled into the story, we’re taken back to the courtroom to hear the Valeyard’s arguements or hear the Doctor make some blustering argument. Whether it’s a limitation of the set-up or the set design, the court room sequences start to lose their novelty and interest quickly, as many of them are just blustering by the sixth Doctor. It’s a shame when compared to the work Colin Baker does in the other sequences of the story to see him have to resort to the bluster and bravado that aliennated viewers from the character in the previous season.

It’s then followed up by the story set in the adventure the Doctor was previously engaged in before being plucked out of time. In what is one of the single-worst stories in all of “Doctor Who,” the Doctor and Peri arrive on the planet of Thorus Beta. They meet up with an old adversary Sil from the previous season’s “Vengeance on Varos.” Interestingly, the storyline of “Mindwarp” takes a page from this month’s other release “The Brain of Morbius” though it’s not even in the same league. A mad planet leader is working with a scientist to lengthen his life by transferring his brain from his head to another subject. And, at first, it appears the Doctor could be an ideal candidate for the procedure.

What follows are four of the most appalling bad episodes of the entire series’ run but four you can’t necessarily skip because events in them are pivotal to the trial storyline. Early in the story, the Doctor endures a shock to his brain and begins to act extremely out of character, furthering damnning him in the eyes of the jury. However, because the Doctor has amnesia during the trial, we’re never sure if this is what really happened or things being distorted by the Matrix. And it’s obvious from some of the actors that they’re not sure what the motivation here is either.

It all leads to a sloppy mess of a story. And I haven’t even addressed the over the top hysterics of Brian Blessed as King Yrcanos in the story, who shouts every line he’s given like something out of a Monty Python sketch.

Thankfully, the series moves on to the next story, “Terror of the Vervoids” which is from the Doctor’s future and is more your standard “Who” story. The Doctor and his new companion, Mel, respond to a distress call from a starliner and discover passengers and crew are mysteriously being killed. Again, the story borrows a page from a Tom Baker classic “Robots of Death” (which took its cue from any number of Agatha Christie closed room mysteries) to set up a series of suspects before revealing the real culprit. It’s not terribly great “Who” but it works well enough and it does lead to a central upping the ante for the courtroom drama as a whole.

Finally, it’s “The Ultimate Foe” which after twelve episodes should be an epic, sweeping wrap-up to the trial but instead is a good idea gone horribly awry. A lot of this can be squarely put at the feet of behind-the-scenes turmoil in the show. Initially, the final episodes were to be written by Robert Holmes, but Holmes passed away before finishing the final installent. The writing duties fell to script editor Eric Saward, but he left the position midway through the season, taking his final script and all ideas with him. Enter Pip and Jane Baker, who wrote “Vervoids” and are forced to come in and try to make sense of everything and wrap it all up. Clearly they are limited in what they can and can’t do and the final episode, while running long, doesn’t really provide the closure or punch a fourteen-part story of this magnitude really deserves or need.

Which may be the biggest tragedy of the season. There was potential for it to be so much more than it was. But becuase of behind-the-scenes turmoil that overshadowed the entire production, the final on-screen product is found to be lacking.

That and the story introduces the single worst companion casting choiceÂ in history–Bonnie Langford as Mel.

Thankfully, the DVD set for this season is honest and frank about this era in the history of the show. Every episode has a commentary on it, most of them achored by Colin Baker and featuring various members of the cast, crew and writing staff. Eric Saward features on his own separate track for episodes one and thirteen, providing some insight into the decision to make the story and his run on the show. Saward’s comments are a bit more telling than usual and it’s good to see him offer a frank look at the show and his time on it. Too many times before, we’ve seen Saward offer little but vitrol about his time on the show and while we may not be getting the whole story of what went on (I doubt we ever will), it’s still a fascinating look at an experiment gone wrong.

Each story features a “making of” documentary, examining each story and its various production aspects.

The real highlight of this set is a 55-minute documentary on the entire two-year run of Colin Baker as the Doctor. As one of the more controversial eras in the show’s run, I wondered how this would be approached. Would it be glossed over or would we get a frank examination of the strengths and weaknesses of the era, all of which led to Baker’s eventual firing from the role. And in what is, perhaps, the best extra the DVD line has ever produced, we get a candid, frank and telling examination of the era. Many of the participants are exactly who you want to hear from in the era, though it’s sad that producer John Nathan-Turner is no longer with us to offer his side of events. Saward does well in the interviews and we can hear the pain and hurt feelings that still exist from Colin Baker to this day. It says a lot about Baker as a person to hear him participate so candidly but also to see how he still promotes the role of the Doctor to this day and continues to reprise it in the various audio adventures.

This feature alone is worth price of admission. If you’re a “Doctor Who” fans and wondering why you might want to shell out close to $60.00 for “The Trial of Time Lord” this documentary is worth it. Of course, there are a lot of other nice extras to and the sound and picture looks great (as always).

“The Trial of a Time Lord” is available on DVD and can be purchased at Amazon.