“…when the franchiseâ€™s killer, Rusty Nail, gets his engines revving, and his claws in his victims, the film becomes a rollercoaster thrill ride…” 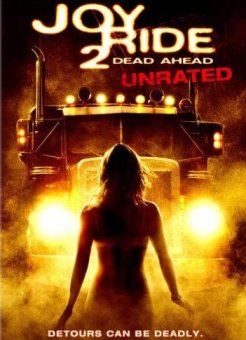 Thereâ€™s something very intimidating about truckers. They drive a rig that could end your life in a split second, and often times they are colorful characters to say the least, hardened by the road. Steven Spielberg tapped into this unnerving fear brilliantly in Duel, and ever since, the â€œtruckerâ€ horror movie has made brief, albeit inferior, appearances in many films like Joy Ride.

While the film does feature a fairly gratuitous torture sequence, youâ€™ll be surprised at how sickly innovative it is. Had the opening act, which features a rambunctious foursome stranded after their car broke down in the middle of the desert, led to a more logical situation then breaking into Rusty Nailâ€™s home and stealing his car, the gory climax might have been even better.

For a low budget picture, Joy Ride: Dead Ahead manages to pack an explosive punch. Two big set pieces, leading to vehicles going boom, should impress the crowd of naysayers that frown upon straight to video production quality. While the set up leaves much to be desired, the execution is fantastic, and the results are quite entertaining.

Joy Ride: Dead Ahead is at least worth a look for genre fans, especially with its great special effects make up featurettes.