“‘Notorious,’ is the crown jewel of the package. The epic romantic/thriller starring Ingrid Bergman and Cary Grant represents some of Hitchcockâ€™s finest cinematic moments…” 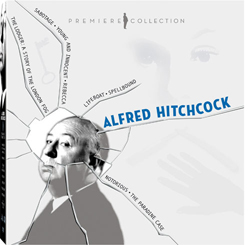 The Master of Suspense comes home in a brand new, pristine DVD collection from MGM Home Entertainment. Including eight of Alfred Hitchcock’s best motion pictures gorgeously remastered, this is one DVD set that any film fan in your life deserves to have proudly displayed on their shelf.

Even though some of the titles are being simultaneously released individually, this gorgeously compiled set is a must have for the Hitchcock completest. Complete with a 32-page notebook filled with fun
facts, trivia and production notes, the presentation makes the extra expense well worth the added cost. The set is also filled with special features, including audio commentaries from historians, a plethora fascinating featuettes and a wonderful AFI Tribute to Hitchcock.

Though the content should keep fans and newcomers busy for quite some time, the fact that you can find classics like the Best Picture winner Rebecca, Notorious and Lifeboat all in one convenient package should make The Alfred Hitchcock Premiere Collection an exciting purchase.

One of my personal favorites, Notorious, is the crown jewel of the package. The epic romantic/thriller starring Ingrid Bergman and Cary Grant represents some of Hitchcockâ€™s finest cinematic moments, and the genius directorâ€™s most clever ways of interspersing controversial content into an age of cinema dominated by an overly ethical Production Code.

While Hitchcock is indeed one of the greatest filmmaker of all time, the release of the Premiere Collection is not without flaws. Like Universalâ€™s recent releases of Psycho and Vertigo on DVD, The Premiere Collection lacks a simultaneous high definition release; meaning fans of The Master of Suspense will have to wait even longer for Hitch to go Blu.