“Every dramatic punch is met with awful dialogue and delivery from its actors.” 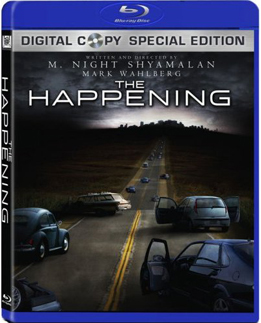 Iâ€™ve always been a fan of Mark Wahlberg, but with the release of his latest vehicle, The Happening, I couldnâ€™t separate the actor from the hilariously funny SNL skit, â€œMark Wahlberg Talks to Animalsâ€. While one can easily argue that M. Night Shyamalanâ€™s pictures have continually gotten worse, for the most part theyâ€™ve always had consistently good acting. That is until now.

Shyamalanâ€™s ultimate apocalyptic B-movie, comes home on a great looking Blu-ray disc, however as much as youâ€™d want to like The Happening, youâ€™ll quickly realize how laughably bad the picture is. Every dramatic punch is met with awful dialogue and delivery from its actors.

While Wahlberg does have a distinct way of talking, and Andy Sandberg did do a great job of poking fun at him on national television, the fact that everyone else in the picture is equally awful reflects more on Shyamalan then a timely roast. The way Wahlberg reacts to dire situations, and his wooden relationship with the equally dumbfounded Zooey Deschanel, who is usually pretty great in her own right, puts the blame definitively on the filmmaker.

Itâ€™s a shame too. The Happening does have quite a bit you want to like. Some of the ways victimsâ€™ of this air born epidemic off themselves are downright creepy. Other times theyâ€™re as laughably bad as the acting. The Blu-ray disc comes equipped with some fun special features, including a segment following Shyamalan on an average production day, how the director adapted to an R-rated feature and what it was like to shoot on a real, moving train. As far as the picture goes though, this is one flick that just isnâ€™t happening.