Bringing back some of the original cast and taking the horror comedy series to new heights (or lows depending on your perspective), Gulager managed to secure distribution from Dimension Extreme to make not only a sequel, but a third installment of Feast as well. While Feast III: The Happy Finish is having the finishing touches put on it, Feast II: Sloppy Seconds hits DVD just in time for Halloween.

Old characters meet a fresh and zany batch of victims as the flesh eating monsters come back to, well, feast some more! This time Melton, Dunstan and Gulager included everything but the kitchen sink. Featuring midget wrestlers, sacrificing infants, catapulting grandmothers, blatant and unnecessary, gratuitous nudity and larger monster genitalia. There is plenty of camp and gore for horror fans to love. However Feast II: Sloppy Seconds lives up to its name, as this sequel lacks the polish of the original. The acting is infinitely inferior, the monsters donâ€™t look nearly as menacing in the daylight and blatant green screen sets hurt the overall production value. Of course if you can look past all that, Feast II: Sloppy Seconds is an amusing way to spend an hour and forty minutes. Just donâ€™t expect it to leave you overly revved up for the third installment. 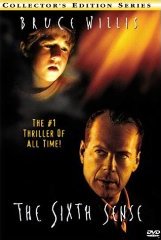 Everyone gives The Sixth Sense a lot of slack. Most people say the film is lacking in replay value, and that knowing the surprise ending makes the film grating to watch. It has become such a rampant joke that it was the brunt of a running gag in 50 First Dates. It also doesnâ€™t help that each of director M. Night Shyamalanâ€™s subsequent features havenâ€™t come close to achieving the same critical and commercial success. However, there is a reason that The Sixth Sense launched Shyamalan into the upper echelon of Hollywood so quickly; it really is a masterpiece.

From the fantastic story, to the stunning performances from Bruce Willis, Toni Collette and Haley Joel Osment, plus the brilliant cinematography from veteran Director of Photography Tak Fujimoto, The Sixth Sense is a chilling achievement. Now on BluRay High Definition, The Sixth Sense is flawlessly transferred. While the narrative still brings the frights, the picture is outstandingly perfect. Though the special features remain the same, the ported 40 minute Making-Of documentary, Reflections From the Set, is well worth the price of admission, especially with Disneyâ€™s DVD to BluRay rebate program. Do yourself a favor, relive the scares this Halloween in high definition!