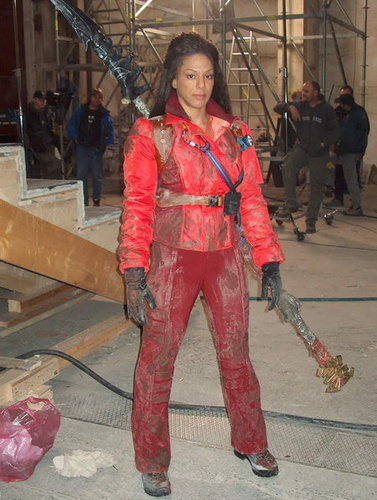 Angelica Lisk is an extraordinary performer. An actress and professional stunt performer, she began excelling very early in life training to be an Olympic athlete. A real tomboy, the idea of following in her mother’s modeling career didn’t seem to fit her personality, but hearing about her father’s – a pro football player, and her Uncle’s – a race car driver, exciting life Angelica realized that this kind of excitement was what revved up her motor.

Angelica started getting into acting by doing small roles in television, films and commercials. In 1997, on of the industry’s top Canadian coordinators – Branko Racki – introduced Angelica to stunt work in the film “Half Baked’….and the rest is, as they say, “history!”

In this interview our Linda Craddock in New Jersey talks to Angelica from her home in Toronto, Canada. At one point she tells this great story of something that happened one evening to her while having a good time with some of her friends in the once-famous Studio 54 bar. It is a classic true story that immediately reminds one of some of those great John Wayne saloon scenes.

Angelica can next be seen in the October 17, 2008 release of the Mark Wahlberg starrer, “Max Payne.” Some of her other films and TV work include “Caveman Valentine” with the great Samuel L. Jackson, “The Incredible Hulk,” again with Jackson in “Jumper,” the “Bionic Woman,” “Eragon,” “AVP: Alien vs Predator” and so many more.

Sit back and enjoy this interview with Angelica Lisk, one of the most delightful guests it has been our pleasure to have on Slice of SciFi.