“‘The Invasion of Time’ sounds great on paper….But in execution, the story comes up a bit short.” 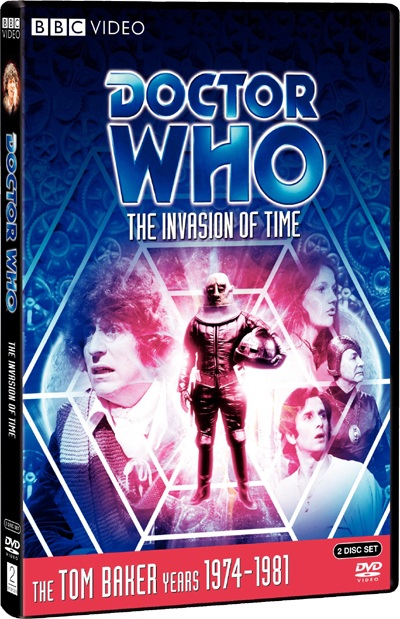 The fourth Doctor is acting strange, even for him.

Following a clandestine meeting in deep space with a mysterious trio of aliens, the Doctor returns home to Gallifrey and declares himself a candidate for the office of president of the high council.Â Â  As the Doctor prepares for his coronation, he behaves oddly, alienating his companion Leela, making strange demands of his fellow Time Lords and refusing to explain his sudden interest in Gallifreyian politics.

It’s soon revealed what the Doctor’s motives are, who he’s working for and what he hopes to achieve by apparently betraying his fellow Time Lords.Â  And that’s all before we get to the big twist that’s clearly spoiled by the DVD packaging on this six-part story from Tom Baker’s fourth season in the iconic role of the Doctor.

As many of those interviewed on the DVD extras attest, “The Invasion of Time” sounds great on paper.Â  It’s got the Doctor going back to Gallifrey following the events of the series-changing “The Deadly Assassin,” it’s a further exploration of the society of the Time Lords and it’s got political intrigue, back-stabbing and a number of potential twists and turns in the plot.Â Â  But in execution, the story comes up a bit short.Â Â  Part of the problem is the behind-the-scenes intrigue is almost more interesting than the story itself.

Hastily written by producer Graham Williams and script editor Anthony Read, “The Invasion of Time” is one of the more blatant examples of the Baker era of a six-part story being little more than a four-part story linked to a two-part story.Â  The first invasion of Gallifrey is clearly averted by the end of episode four, just in time for the planet to be invaded again by the “real” invaders.Â Â  And while there’s a lot to like in the story, large chunks of parts five and six are little more than the “Doctor Who” cliche of running through corridors.Â  In this case, it’s an extended tour of the TARDIS corridors, the first such exploration of the interior of the mysterious craft since the mid-60’s.Â Â  Again, on paper, it should be exciting, but the reality and budget constraints meant this had to be filmed on a location, so the same sets are used over and over again with the explanation that the TARDIS corridors all look the same to the untrained eye.

It’s easy to see why “Invasion of Time” was released this year.Â Â  With the Sontarans returning in series four, releasing a story featuring the cloned aliens makes sense from a marketing standpoint.Â Â  However, if this is your first exposure to the Sontarans, you may find yourself wondering what made them so special and well remembered by classic “Who” fans.Â Â  (To see just why they were so well regarded, I recommend picking up Jon Pertwee’s “The Time Warrior” which introduces the aliens instead).

But, as with all classic “Who” DVDs, it’s not just about the story, it’s about the extras.Â  The biggest is the re-creation of some of the on-screen effects, including updating the look of one of the alien races, the Vardans.Â Â  The Vardans looked cheap even by “Doctor Who” standards, so the updating done here is refreshing and actually helps the visual appeal of the story.Â  In most cases, I tend to watch the updated CGI effects one to take them in and then will watch the stories with their original effects in tact (thankfully the BBC understands that while we like the new bells and whistles, we also love our “Doctor Who” for it’s warts and imperfections).Â  But with “The Invasion of Time” the recreated Vardans are so refreshingly well done and show what could and should have been done at the time, that is creates a superior visual version of the story and I find myself having a difficult time ever watching the original effects again.

The disc offers a commentary track by script editor, Read, companions Louise Jamison (Leela) and John Leeson (voice of K-9) and visual effects designer Matt Irvine as well as a text commentary.Â  While not the strongest commentary in the “Who” universe, it still has its moments and fans will learn a few new tidbits and nuggets about this story.Â  The audio commentary needs someone to help focus the conversation, especially on these longer stories, as is done with most of the stories from the 1960’s.

Other extras include deleted scenes, a documentary on the “writer” David Agnew and a look at the circumstances surrounding this story.Â Â  The documentaries are up to the usual standard of excellence set by the “Doctor Who” DVDs, though Tom Baker is curiously absent from any comment on the story.Â Â  And while there is some crossover on the material related, most fans won’t mind.

However, some fans may balk at the price tag on this two-disc set, especially when you find out the second disc clocks in at just under an hour.Â  Initially intended as a single disc set, the new CGI effects meant most of the space on a single disc was taken by the story.Â  The extras are put on the second disc, leading to a higher price tag for fans while not offering the usual plethora of extras associted with two-disc “Doctor Who” releases.

So, what’s left is a mixed bag.Â  It’s a decent story made better by the updated effects.Â  And it has its moments, including some great work by Tom Baker (though his excesses are beginning to show).Â  However, if you’re a fan new to “Doctor Who,” looking to discover more about the classic series during the year-long hiatus, you may be better served to look at an earlier Baker story or the previously mentioned Pertwee story “The Time Warrior.”Â Â Â  The DVD does highlight the one gaping hole in Tom Baker releases that begs to see the light of day, the classic “Deadly Assassin.”

This one is worth picking up if you’re a long-time “Who” fan but I’d encourage newer fans to consider a rental first.

“Doctor Who: The Invasion of Time” is available from Amazon.