MoviePulse Overall SCORE = 8/10“No matter how unlikely, how nonsensical, or how irresolute their many escapades turn out to be, it’s still impossible not to laugh when Larry loses a handful of hair.” 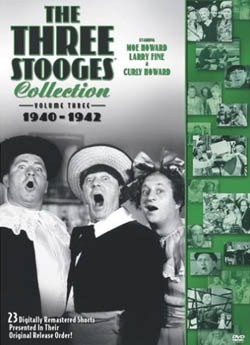 Volume Three of The Three Stooges covers their short features from 1940-1942 when Moe, Larry and Curly were still going strong, and being consistently funny. Twenty-three new episodes grace this two-disc set and include several of their most hilarious skits. Although taken from a Laurel and Hardy routine, the Stooges’ ice-capades in “An Ache in Every Stake” is one of the highlights of these two years, as well as the uproarious pie fight in “In the Sweet Pie and Pie.”

The first short in the collection, “You Nazty Spy,” features the Stooges portraying dictators for the country of Moronica. Their spoof on Nazis was apparently so popular that a follow-up episode, “I’ll Never Heil Again” (also on this disc) was later released in which they reprise their roles as the same Moronic characters. The Stooges are up to their classic violent schemes, doing their best to hurt one another in the most comical ways. Whether removing a sweater with a tire iron and hammer, or sliding around on grease 97 stories up in the air, the routines on the first disc keep getting funnier.

Occasionally a few jokes and gags will be re-used, but each episode finds the Stooges in the role of different characters and with unexpected jobs. In “Some More of Somoa” the trio are tree surgeons — intent on avoiding taking up employment in a field already parodied. In “How High is Up” they become riveters; in other episode they’re plumbers, doctors, census takers, cooks, icemen, beauty salon owners, army men and more. “Nutty But Nice” has the group struggling to get a sick child to laugh (unsuccessfully), which is especially ironic since their adventures are so immature it’s possible that only adults will find them funny. Of course, nostalgia helps too.

They pretend to be insane, avoid “Indians in the Rockies”, unintentionally brutalize four young women in a ramshackle beauty salon (perhaps the episode in which they come the closest to killing anyone), spike punch with alum, try desperately to go to jail and engage in a riotously grand pie fight. In “No Census, No Feeling” the three airheads accidentally become census takers while trying to avoid the law, end up at a bridge game, and finally transition to running through a live football game. Several of the episodes in these two years have the most complex and unrelated plotlines merging into a single adventure — which has us question whether they were originally intended to be multiple shows.

The majority of Disc Two finds the Stooges getting mixed up in scatterbrain antics that have no real resolutions and often shift from location to location while ignoring characters and plots already half developed. But no matter how unlikely, how nonsensical, or how irresolute their many escapades turn out to be, it’s still impossible not to laugh when Larry loses a handful of hair, Curly barks at the ladies or Moe gets knocked out by some deadly instrument.