“I really wanted to have the opportunity to give this film a good review, however, the actors simply forbade me from doing so.”

“Shadows Light” has a really good premise, a fine script, but B-Movie special effects and acting about as stiff as a four-day old corpse.

The film opens ala “The Exorcist” and revolves around a big city Catholic priest who specializes in casting out demons. In fact, he is so good at his job that the Church has run him ragged. His Monsignor sends him on a two-week sabbatical to try and get some much needed rest. The priest decides to take refuge in the town he grew up in but rest is something he won’t be receiving any time soon. 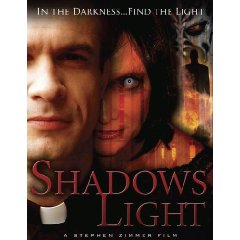 He soon runs into a bevy of demons that take over their victims causing them to age rapidly and then die. Once dead, the demon absconds with the soul of the possessed and returns to hell with its prize.

Stephen Zimmer did a fine job on the script. He has written a novel idea that blends a mix of religion, politics, murder and sexual escapades into a story that could have been a really exciting feature film. I really wanted to have the opportunity to give this film a good review, however, the actors simply forbade me from doing so. Zimmer took on the task of also directing and I can’t fault him too much because I don’t believe Martin Scorsese could have gotten a better performance out of this cast. I suppose I do have to pin the choice of actors on Zimmer since he also served as co-executive producer, but when you are making an indie film with less than a stellar budget you are forced many times to get what you pay for.

While I really liked the concept behind the film, watching it was just too laborious and the 96 minutes felt more like 4 hours. Do I recommend this film? If you are a real lover of horror who has a high degree of forgiveness and the patience of Job, then yes, by all means watch this movie. However, if you are like me, someone who can take or leave horror on the curb and, as an honest film critic doesn’t have the luxury of giving films like this a pass, then you may want to leave it alone.

~ Samuel K. Sloan
Out of 5 possible stars the SoSF SCORE =