“Nothing more than a long episode of the show, which is virtually pointless to those who may have missed the show during its initial run.”

I want to believe that this is a satisfactory follow-up to the decent X-Files: Fight the Future. I want to believe that with all the tight-lipped secrecy about the plot from 20th Century Fox, that they aren’t hiding a dud from the unforgiving press. I want to believe this is a good film period. However, what I want to believe and what really is have become two different entities entirely in this case. The X-Files: I Want to Believe is nothing more than a long episode of the show which is virtually pointless to those who may have missed the show during its initial run. Sure the series creator and director, Chris Carter, creates a mildly suspenseful plot but there just is not enough development of the characters for the story to have any relevance. 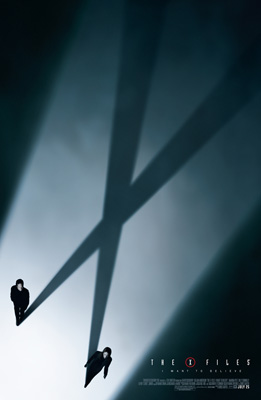 The X-Files 2 begins with the FBI searching for a missing agent. They are using a man named Father Joe, an ex priest who claims to have psychic abilities from God, to find their agent. The FBI begin to wonder if Father Joe is making all of his powers up so they bring in Fox Mulder and Dana Scully for their advice on the matter. Mulder believes Father Joe could be telling the truth and so the search continues. Soon, body parts are uncovered around areas that Father Joe revealed to the conspiracy chasers and Mulder and Scully find themselves in a race against the clock to find the agent before it is too late.

The problem with all of this is that most of the suspense is initially drained within the first hour, because we learn quickly who is potentially burying the body parts and is holding the FBI agent captive. Had there been more focus on the development of Mulder and Scully’s characters instead of just the plot, Carter could have easily avoided showing the “bad guy” at the beginning. As the film continues, the suspense does ratchet up a little due to the predicaments that Mulder and Scully must face, but one can’t help but get the feeling that this is just an excuse to put a lengthy, non-aired episode on the big screen. While the new film won’t bore you out of your mind, at least the first X-Files film had an increasingly interesting plot and a reason to be on the big screen thanks to its explosive effects.

Carter did do an admirable job in the later half of the film when more of the plot is revealed. Things start to get a little hairier, just like episodes of the show. Though, fans that are hoping for more extraterrestrial affairs in this sequel should go re-watch the show because the closest thing to alien here is a humorous jab at George Bush.

The acting is solid throughout, except for Xzibit as the dull agent who just can’t believe in anything. Gillian Anderson and David Duchovny both look much older of course, but they hold their own just fine. One of the best elements of the movie is the grave atmosphere that series composer, Mark Snow, creates with the score.

The X-Files 2 is not awful by any means, but it is mediocre as a stand-alone film. It relies on the audience to have seen the rest of the series, and after six years, many audiences will have not. For fans, I want to believe this movie will rejuvenate your currently defunct X-Files cravings, but there is no guarantee. The X-Files 2 is simply a mundane episode of the show that Fox is hoping will gain a slice of that summer box office pie.