This review was previously published on Kick-Ass Mystic Ninjas in June 2008.

It was originally published July 2004, and the Limited Edition Region 1 DVD set by UK-based Network Videos was expensive and hard to come by.

In Fall 2007, the series was finally released domestically by Acorn Media, split into two sets, Set 1 featuring Michael Praed’s Robin, and Set 2 featuring Jason Connery’s Robin. Both sets can be found at places like Best Buy and Amazon, and a complete series box set is scheduled for release in July 2008. 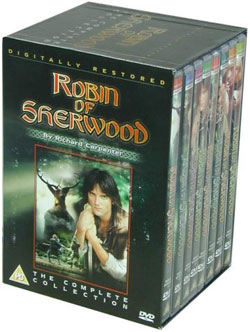 “A hooded man shall come to the forest. There he will meet with Herne the Hunter, to become his Son, and do his bidding.”

This collection contains all 3 series, 26 full episodes clocking in at nearly 22 hours, not including extras. It’s also a numbered Limited Edition Region 1 set, produced exclusively by Network Videos, one of only 2500 produced, quite likely making this DVD set rarer than the the novelizations of the series.

Even after 20 years, this series still holds a special place in the hearts of many, including mine. Seeing these episodes in clearly remastered digital glory rekindled the magic, even though it’s been nearly 15 years since I’d seen them last, on worn and barely viewable VHS tapes made from the series’ brief run on Showtime from 1984-86.

Though the characters were written to feel a bit more contemporary than the real inhabitants of England circa 1120, the story-telling doesn’t feel dated. The passionate performances, especially in episodes from Series 1 and 2, still make you love the outlaws and hate the aristocracy.

The video quality is the same as I recall from the original broadcasts, but there is some noticeable artifacting during a few of the fast-moving close shots during some sword fights. The intentional softness of the picture remains, without detracting from overall image clarity, and maintaining the dreamlike quality throughout the series that the creators wanted.

The Dolby remastering of the audio has resulted in the sound being a bit uneven. While the dialogue volume varies from disc to disc, the Clannad themes and incidentals pop, enhancing the ethereal atmosphere of the series.

Two of the discs are incorrectly labeled: the bonus disc of extras isn’t labeled as such, and Disc 2 (Series 1, episodes 4-6) is labeled as being the bonus disc. The DVD case inserts also still contain the UK particulars describing the discs (Region 0, PAL encoding), which contradicts the information on the set box. Both are very minor nitpicks compared to the quality of the rest of the set.

Disc 3: Series 2, Episodes 1-4
The Prophecy, The Children of Israel, Lord of the Trees, The Enchantment

Disc 6: Series 3, Episodes 4-6
The Inheritance, The Sheriff of Nottingham, The Cross of St Ciricus

The Acorn Robin of Sherwood domestic DVD and Blu-ray releases from a couple years ago are readily available from online retailers now, including Amazon.com, so buy and enjoy!

Spiteful Puppet has been creating original Robin of Sherwood audio dramas, and now they are printing new paperback stories.