SCORE = 7/10
“Jack Black is nearly perfect as Po, who one might imagine as Black in a panda suit.” 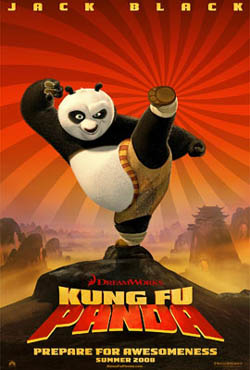 DreamWorks Animation once again produces a computer animated film that contains topnotch animation, plenty of comedy, and recognizable celebrity voices. Kung Fu Panda also has a generous helping of heart, and Jack Black’s voice performance manages to be exceedingly entertaining instead of generally annoying, as some of his live action routines tend to become. With martial arts action, adventure, and jokes for both children and adults, Kung Fu Panda is worthwhile family entertainment.

“There is no charge for awesomeness,” states the all-powerful Panda warrior Po, as he dreams about fighting droves of enemies and defending his home, the Valley of Peace, with unmatchable martial arts skills and esprit de corps with his battling companions, the Furious Five. But when he awakes, Po (Jack Black) is nothing more than a clumsy and overweight panda noodle vendor who is destined to serve the valley the finest meals with his father (who is a goose). Po yearns to learn kung fu and help save his people by doing battle against all who threaten their way of life, but as his father continually reminds him, it is not his destiny.

Fortunate circumstances change everything one day when Po journeys into the city to watch the sage Master Oogway finally choose the legendary Dragon Warrior, prophesied to defeat the vile Tai Lung, a rogue warrior who has been locked away for years. The candidates are the legendary Tigress (Angelina Jolie), Monkey (Jackie Chan), Mantis (Seth Rogen, who seems to be in every animated film this year), Viper (Lucy Liu), and Crane (David Cross). When Po accidentally crashes into the arena via fireworks strapped to a wooden chair, Oogway pronounces the unconscious panda as the mighty Dragon Warrior. Shocked and thrilled, Po joins the five skeptical warriors in the Jade Palace as they train to battle Tai Lung, who recently escaped from an inescapable prison stronghold. But the greatest kung fu teacher Shifu (Dustin Hoffman) is outraged at Oogway’s decision to leave the city in the hands of the unskilled panda. It will take everything in Po’s power to live up to the designation bestowed upon him, and to prove that even a chubby lummox can master the martial arts.

Kung Fu Panda is another technically superior achievement for DreamWorks Animation, utilizing some of the best computer graphics and animators available. The movements, textures, fur/hair, backgrounds, and lighting are impressively realistic, even though the character designs themselves are largely cartoonish. But those designs are also outstanding, demonstrating a great sense of humor with Shifu’s tiny mouse, Oogway’s quivering turtle, Po’s roly-poly panda, and even background characters such as a pig with five o’clock shadow. Going hand-in-hand with the hilarious character designs is the editing, which oftentimes mocks anime and martial arts films, and starts off in stylized 2-D animation during Po’s dream sequence.

Gathering together a large ensemble cast of recognizable voices, for once the numerous celebrities don’t detract from the film. Jack Black is nearly perfect as Po, who one might imagine as Black in a panda suit. Unlike this year’s Horton Hears a Who remake in which Jim Carrey and Steve Carell’s voices overshadowed their characters to the point of unrecognizable, Po is believable just as he is. Hoffman and the many supporting characters also deliver appropriately subtle performances that don’t take the viewers attention away from the animated exploits onscreen.

Although the re-watching value might be slim for adults, and the underdog tale is understandably generic, Kung Fu Panda packs a punch with its traditional martial arts mix of fast-paced action, way-too-powerful villains, destinies, legends, prophecies, and killer kung fu moves. And to top it all off is constant comedy (albeit immature, “a kick to the tenders” comedy) that is sure to provoke chuckles from everyone.