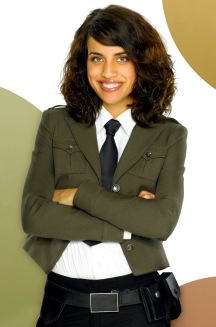 Slice of SciFi journalist Linda Craddock was able to get actress Natalie Morales to slow down just long enough to talk a bit about her new ABC Family series “The Middleman”, based on the popular comic book.

Morales, who got into acting quite by accident, is best known for her part in the VG “Pimp My Ride,” the big screen feature film “Miami Vice” and guest shot on “C.S.I. Miami” is the female lead for the new series. Her co-star for the new series is Matt Kesslar (“Jekyll”) as The Middleman. In real-life, Natalie is a big fan of Star Wars and fashions her character in the new show as a modern-day Hans Solo.

Morales stars as Wendy Watson, a young lady who is unexpectedly saved by a comic book-type hero known only as “The Middleman” during a lab explosion. The way Wendy handles herself during this crises so impresses the hero that she joins him in his crime-fighting crusade.

The dramedy debuts on the ABC Family cable network once “Greek” finishes out its season run. Look for the primetime premiere of this anticipated series on June 16, 2008 8/7C.

Linda Craddock (SoSF): Hello Natalie welcome to Slice of SciFi and thank you for taking the time.

Natalie Morales (NM): Thank you for having me!

SoSF: You must be very excited about the premiere.

SoSF: Tell us about the process of getting this role?

NM: Well, it was an audition. Then call back, then another callback, then a nerve-racking audition for the network, then a camera test… and then! The landing of the role. Yesssss! It was like a month long process.

SoSF: Had you read the comic series prior to landing the role?

NM: Yes, I read it before my callback. It’s actually pretty close to the series.

SoSF: What was your first impression when presented with the script?

NM: I thought it was great. Really funny, and totally different.

SoSF: Now the show’s theme is Wendy, your character, is pretty bored with her current lifestyle, etc. Some freak accident puts here in contact with a stranger who identifies himself only as “The Middleman.” She then embarks on this journey of bringing down the bad guys with him. Will anyone else in Wendy’s life soon discover her other persona or will the writers hold out and maintain the mystery?

NM: Someone always finds out or at least suspects when something about a person sort of changes, right? I think Lacey [actress Brit Morgan] might suspect something. I mean– Wendy does… all of the sudden starts walking into her apartment with a gun– so yeah. I’m not exactly at liberty to say whether or not Lacey’s suspecting might turn into something more though. You’ll just have to wait and see!

SoSF: What would you say would be one aspect of your training as an actor you’ve tapped into to bring Wendy to life?

NM: I’d say the whole listening thing. You’d think that’d be pretty basic stuff, but its harder than you think. Despite the amount of lines we have, its important to not get caught up in what you’re gonna say and just wait for your line– but actually take time to listen to what the other person is saying and genuinely react to it.

SoSF: Describe some of the criminal characters we can look forward to seeing the duo of Wendy and The Middleman battle.

SoSF: Tell us about any training you had, maybe police or military terms, weaponry to develop your character signature for the show?

NM: None whatsoever. (Laughs) Greg Barnett, our Stunt Coordinator is pretty amazing though, and is helping me along the way.

SoSF: Have you had any prior experience with martial arts?

NM: (Laughing) If you count karate at my preschool, then yes.

SoSF: What sets this show apart of from other male/female crime fighting teams that has aired on TV in recent years?

NM: I think the comedy. One of the reasons I’m so happy about this and so proud to do it is, there really aren’t enough funny roles for girls out there. This is really different from ‘Alias’ or ‘Heroes’ in that it is comedic. It’s got kind of a ‘Get Smart’ / ‘Men in Black’ vibe.

SoSF: Will you have like this special outfit your character will wear while performing kick-ass crime fighting sequences?

NM: (Smiling) I do have a Middleman uniform, but sometimes duty calls when you’re lounging at home, or hosting a party, so…

SoSF: How would you compare some of the story line with today’s political evolution, with the war, and other social issues we face today?

NM: I wouldn’t. This show isn’t trying to preach anything. It’s entertainment and it’s an escape from all the crappy stuff going on in the world.

SoSF: During production, do you get a chance to view finished scenes and how would you describe some of the special effects involved to develop the theme of the series?

NM: I actually haven’t gotten to view any finished scenes. Except for the pilot

SoSF: I’ve read some reviews which describe the show as inspired by lunacy. What would be the one of your favorite and funny moments while filming this project?

NM: I haven’t read those reviews, but I’m sure some lunacy ensues when you’re on your 16th hour of the day! You know, I don’t know, actually I have fun and laugh on the set every single day. I can’t think of anything specific. The crew on this set is awesome and we’re always singing weird early 90’s songs or doing ridiculous stuff in between takes. It’s a ton of fun!

SoSF: Reviews from a variety of sources also identify the show as enjoyable on many different levels which will appeal to a broad range of viewers. Elaborate, if you will, on the comedic, dramatic and sci-fi aspect of what we will experience watching the show.

NM: Well, it’s definitely for a broad range of ages… there’s cool weapons and action for kids and there’s also humor that’s definitely adult. The show is funny, but Wendy is dealing with some serious things at the end of the day. There’s some real-life stuff going on despite all the craziness. And by craziness of course I mean the sci fi part of the show… aliens, monsters, villains, trout. Yes, trout!

SoSF: Any other projects on the horizon for Natalie?

NM: Not as of right now. Too busy working on The Middleman. I did, however, produce a web series called “Quitters”. Check it out on any internet video site!

SoSF: Best of luck with the premiere and we all look forward to a long run with “The Middleman” and thank you again Natalie.