“Certainly many minor inconsistencies and faults can be dissected by excessive analysis, but for its ability to produce pure, mesmerizing entertainment, Iron Man is a glowing success.” 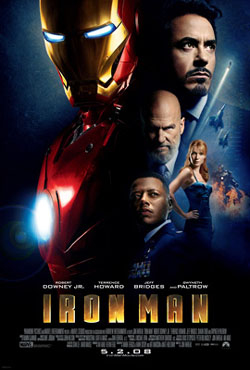 Wisely adapting the most reality-grounded aspects of Tony Stark’s origins and adventures to becoming the “Golden Avenger,” Jon Favreau has brilliantly balanced the elements that create an entertaining movie — let alone an enjoyable superhero movie. With a competent cast of A-list actors, Iron Man should easily please both die-hard fans of the superhero as well as general audiences seeking an epic thrillride.

Arrogant, womanizing playboy Tony Stark (Robert Downey Jr.) has it all — beautiful women, a powerful weapons-manufacturing company, and more money than he knows what to do with. On a business trip to Afghanistan, Stark’s convoy is ambushed and the billionaire is taken hostage by terrorists, while also sustaining a life-threatening injury. With the aid of fellow prisoner Yinsen (Shaun Toub), Stark tricks his captors into believing he will agree to their demands of building a dangerous missile — instead he devises a technologically advanced robotic suit of armor to assist in their escape. Once freed, Stark reevaluates his life’s work and the lethal side effects of his company’s intentions that he so blindly ignored. Constructing an even more elaborate and effective suit, Stark becomes Iron Man and vows to save those he has placed in harm’s way.

As with the origins film of any superhero franchise, plenty of care must be taken with the development of the primary protagonists. Favreau has found a delicate balance between back story and high-flying adventure, leaving Iron Man void of any dull moments. Action junkies may find the number of fight sequences a little on the slim side, but Stark’s transformation from selfish playboy to noble superhero is interesting enough to counteract the lack of nonstop explosions — in fact, the final showdown of the film is actually rather underwhelming when compared to the engaging progression of Stark’s character.

While it may be true to an extent that Robert Downey Jr. has fallen into the steady path of playing himself in every movie, those with a healthy knowledge of the comics will likely concur that Downey’s portrayal of the fast-talking, sarcastically quirky Tony Stark is exactly as it should be. Stark’s character is believable, flawed, and realistic — one easily identifiable with and worth rooting for in the battle against evil — and Downey Jr. has found the perfect equilibrium of quick wit and confident bravado for his armored superhero. A surprising amount of humor has found its way into Iron Man, primarily thanks to Downey’s assured performance and his interactions with an equally able cast. Gwyneth Paltrow as Stark’s clever assistant Pepper Potts holds her own against Downey’s scene-stealing verbal antics, and even Terrence Howard gets to deliver some slick exchanges. An almost unrecognizable Jeff Bridges injects the immoral Obadiah Stane with enough cunning maliciousness to create a worthy opponent for Stark (only going slightly overboard in the film’s climax).

Virtually all comic-based entities will bear harsh scrutiny from the legions of faithful fans, and Iron Man is no different. Favreau’s decision to adapt the Golden Avenger’s reality-based escapades to create a more believable hero should please newcomers, while longtime fans of the character will enjoy the numerous winks and nods thrown in especially for those already familiar with Iron Man lore. Since events in the comics involve everything from time travel to alien dragons, slight artistic changes to the superhero’s origins for the sake of a wider audience should be expected and not entirely unwelcome. Certainly many minor inconsistencies and faults (such as an over dependency on technology to solve problems) can be dissected by excessive analysis, but for its ability to produce pure, mesmerizing entertainment, Iron Man is a glowing success and a promising start for both the crimson hero and this year’s summer blockbusters.

Don’t forget to tune-in to this weekend’s Slice of SciFi show for an Iron Man review from our very own Summer Brooks.