“All of the colorful and chaotic characters in the film are based on Chinese mythology, adventure pulps, and classic kung fu movies.” 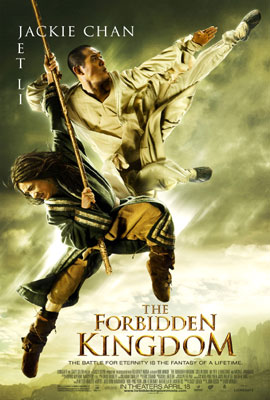 How long have we waited to see Jackie Chan and Jet Li finally get pitted against one another on the big screen? How could their long-awaited collaboration be anything but smashingly sensational? The only way to embarrassingly shatter our images of Jackie Chan and Jet Li finally dueling (with a wide array of masterfully choreographed fight sequences) would be to put them in a fantastical Tolkienesque world, brimming with immortals, prophecies, CG-laden magic and time travel. So that’s what The Forbidden Kingdom does.

Kung fu consumed American teen Jason Tripitikas (Michael Angarano) must travel back in time to reunite a golden staff with its rightful owner – the Monkey King. In his quest to bring order back to the ancient Chinese world he has teleported to, he is aided by Lu Yan (Jackie Chan), an immortal who uses wine and drunken fighting to gain the upper hand; Sparrow (Yifei Liu), a young female warrior whose parents were killed by the injurious ruler known as the Jade Warlord; and Silent Munk (Jet Li), a guardian who is also on a mission to retrieve the staff.

The Monkey King has been imprisoned in stone for 500 years, and his only hope of restoring peace to ancient China is to regain his legendary weapon. Jason undergoes numerous adventures during his journey to the Temple of the 5 Elements, where the immortal Jade Warlord resides with his massive army, including fighting off hundreds of soldiers, and a white-haired demoness with a deadly whip.

All of the colorful and chaotic characters in the film are based on Chinese mythology, adventure pulps, and classic kung fu movies, but the average viewer isn’t going to notice. You would have to be as obsessed as the ambivalent main character to recognize the borrowed concepts from ancient Chinese legend and lore. What the average viewer will undoubtedly notice is the extreme goofiness of the story, all of the plot holes that typically accompany such fantasy fare, and the many quick zooms on ominous faces and statuesque martial arts stances. And perhaps question why Jason already knows how to ride a horse, or why a Jet Li/Jackie Chan movie actually stars a scrawny American boy.

Drenched in eye-rolling fantasy jargon (such as chi magic) and grossly stereotypical characters, the plot is somewhat reminiscent of The Wizard of Oz or Black Knight (the Martin Lawrence film) insomuch as the lead character journeys to a fantasy world designed to match an overactive imagination. Fueled by fanciful yearnings for adventure and excitement, Jason explores lavish settings, including a merciless desert, luscious rainforests, and humongous stone temples, where Woo-Ping Yuen’s stunning fight choreography can look very impressive. In an unbelievable world, the fighting gets equally farfetched, and so wire-fu sequences tend to overtake realistic brawling, constantly breaking up the marvel of watching two legendary martial arts masters finally square off.

The costumes are divine, the snowy-haired Asian-Jessica-Alba demoness is an interesting nemesis, and comedic training montages are abundant, but The Forbidden Kingdom forgets to show us entertainment. Lu Yan remarks that to be remembered is true immortality — which makes it a crying shame that this pitiable film will probably be the only thing to remind us of Jackie Chan and Jet Li’s only movie collaboration.