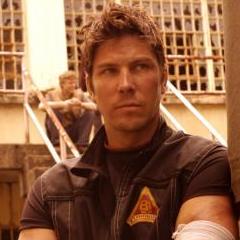 Michael Trucco, the man who stars as Samuel Anders — freedom/resistance fighter, reserve viper pilot, Starbuck’s husband and yes, a frakkin’ Cylon, is our guest this week on Slice of SciFi Show #156, ready for download from your favorite podcatcher on Saturday, April 12 and one week later on Monday April 21 on XM-Satellite Radio’s Sonic Theater.

From the In the News desk will come stories like these:

Paramount Pictures has acquired the rights to film “Lost City of Z,” a manuscript from writer David Grann. Brad Pitt is set to produce the film which could end up starring him in the lead as well. Can Lucas Save the Cartoon Network from its current dreary 19th place in the cable standings? We’ll find out later this year when “Star Wars: The Clone Wars” debuts. In a SCI-FI to SCI-FACT related story, if you can believe researchers at the Brookhaven National Laboratory in Upton, New York, then supercomputers may be on the verge of creating a Matrix-styled or Star Trek holodeck simulated reality….And you just went out and bought that expensive gigantic plasma TV.

In Movie Talk news we’ll take a look at what the fan-generated film and miniseries franchise “Hidden Frontier” is up to these days — and with over 10,000 theaters being upgraded to 3D screens over the next year expect to see fashionable 3D Eyewere to hit the market by the end of 2008.

TV Talk doesn’t want to get your hopes raised too high, however, “Jericho,” the apocalyptic show set in the small town of Jericho, Kansas may be getting a lifeline thrown to it from Comcast Cablevision, according to a recent article in The New York Times….We tell you why it’s doable. And, we’ll tell you all about the NBC presentation of a new anthology series titled “Fear Itself” for a summer 2008 launch coming from those same folks who brought the “Masters of Horror” series to the Showtime premium cable network.

Is the Future of movie making about to change. If filmmaker Jessica Mae Stover has her way it definitely will and fans just like you, the fan, will be ultimately be in charge, not those so-called fat cats in their ivory studio towers.

We hope to see you beginning this Saturday on SliceofSciFi.com.