“Is this film really about looking beyond the physical features of a person to discover their inner beauty? Or is it that rich people suck?” 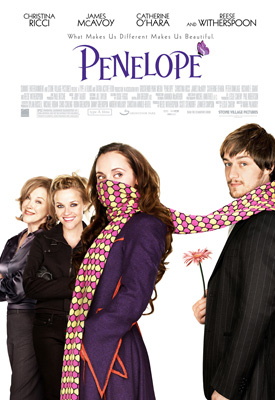 A rather childish blend of comedy, romance and the unearthing of morals and prejudices, Penelope tells the story of a horribly disfigured woman searching for a mythical cure to a monstrous curse. Essentially a reversed Beauty and the Beast, the film manages to be delightful occasionally, but as revolting as a pig-faced child during much of the character development and progression of romance.

When a misguided Wilhern blueblood falls in love with a common woman and then backs out of a marriage to save his noble name, the distraught girl commits suicide. Her furious mother (who is conveniently a witch) places a curse on the first baby girl to be born into the bloodline. After generations of nothing but male heirs to the sizeable estate, Penelope (Christina Ricci) is finally born, a girl with the cursed ears and nose of a pig. Penelope is locked away and raised alone — her parents constantly worried about how the cruel outside world might react to her abnormalities. While some believe in the legend and others do not, Penelope’s only hope of undoing her hideous bovine appendages is to find a fellow blueblood that will love and accept her as she is.

As she learns to live with constant rejection, her parents struggle to keep her away from the media and from other people, first by faking her death, and then by holing her away in their luxurious mansion. To preserve the wealth in the family, her parents attempt to marry her off with a huge dowry, but suitor after suitor runs away in terror. One-eyed photographer Lemon (Peter Dinklage) uses sniveling blueblood Edward Vanderman (Simon Woods) and down-on-his-luck gambler Max Campion (James McAvoy) to get a picture of the pig-girl for use in his newspaper. When Penelope runs away, Max finds himself falling for her when no one else can bear to look in her direction.

Is this film really about looking beyond the physical features of a person to discover their inner beauty? Or is it that rich people suck? Whatever the case may be, it’s difficult to believe the message about inner beauty when Christina Ricci is gorgeous even with the pig makeup. The themes of the film are often lost amongst the bits of comedy that rarely evoke laughter and the shallow character development that causes these paper-thin personas to lose steam almost immediately. The blossoming romance between Max and Penelope is amateurishly insincere and the dialogue that accompanies their flirtations is largely farfetched. Regardless of the message, the execution in storytelling is notably disorderly. Right from the get-go Penelope feels like a live-action recreation of a motif from Shrek, in which the comical green man decides Fiona is perfect as an ogre.

The large amount of cameos in Penelope almost make this film worth watching, although some of them are just obscure enough that they might not fall into the category of a cameo. Nick Frost from Hot Fuzz and Shaun of the Dead shows up, as does Lenny Henry, from the 1990’s BBC show “Chef!”. Supporting roles consist of Richard E. Grant from “Withnail and I” fame as Penelope’s father, and Catherine O’Hara (For Your Consideration) as her mother. Simon Woods does an excellent job as the whiny aristocrat who will do anything to preserve his high-class name, and Ricci is unquestionably pleasant to watch.

Sadly, Penelope works better as a thought-provoking concept than a feature length movie, and the interesting idea is quickly buried amongst the painfully mediocre dialogue and commonplace plot points.