“The consequences of [“jumping”] is that an angry, white-haired black man will hunt you down.” 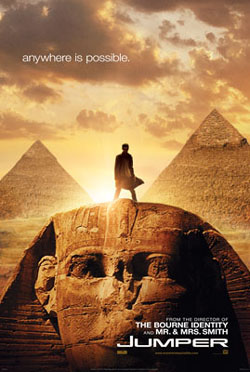 With all the phenomenal superpowers and grandiose action potential, Jumper ultimately falls short in execution. Creative ideas are at work, yet so little is done to properly expand upon their possibilities. What is essentially marketed as a sci-fi action film displays only a few scenes of solid mayhem (the majority of which is revealed in the trailers) and any sci-fi elements are left almost entirely unexplained. Jumper does manage to entertain with the anticipation of something grand, and rooting for an antihero who possesses almost no likeable traits poses an interestingly twisted charm, but the frustration with similarities between what could have been and what ended up threatens to negate any positives.

After falling into a frozen lake and magically teleporting to safety, David Rice (Hayden Christensen) realizes the potential of his mysterious gift. Running away from home, he begins to live life to the fullest — at the expense of others. Robbing banks and teleporting to exotic locales around the world, David amasses a small fortune and a glamorous lifestyle that he uses to woo his childhood sweetheart, Millie (Rachel Bilson). Traveling to Rome to seduce her, David encounters Griffin (Jamie Bell), another “jumper,” and learns of a secret organization whose mission is to hunt down and destroy those possessing such teleportation abilities. Desperate to avoid capture and protect Millie, David must join forces with Griffin to stop the murderous organization leader, Roland (Samuel L. Jackson).

Chances are many a critic will have ill to say about the acting, and while much of the negativity may take aim at Hayden Christensen, it has less to do with his acting abilities and more to do with the scope of the character he was given to portray. With all of his teleporting superpowers, David feels too normal; his traits steer towards the selfish reality of having such gifts. He uses his power to chase girls, rob banks, and picnic atop famous structural wonders. Few redeeming qualities or admirable motives surface in this antihero-of-sorts and renders the warning “there are always consequences” somewhat of a joke. The consequences of such materialistic wrongdoing is that an angry, white-haired black man will hunt you down — but you’ll still save the day and get the girl without anyone really having to pay. For some unknown reason we’re supposed to root for this character (perhaps a lesser of two evils?) and even more inexplicably we do. So is Christensen to blame? Yes, but that’s not a bad thing. Rachel Bilson’s Millie offers a pretty face and ugly dialogue, and Griffin exhibits even fewer likeable qualities than David, but is much less interesting. Sam Jackson plays himself again, complete with requisite scars and terrible costume.

Teleporting has always been a fascinating creation of science fiction, and Jumper‘s premise requires no reason and only a destination. Choosing to explain nothing isn’t nearly as unsatisfying as choosing not to jump outside the box and realize truly creative possibilities. David only uses his powers to travel to exotic locations, woo girls, and unburden banks of their money — not that there’s anything wrong with that, but I had hoped for some slightly more jaw-dropping uses of such a limitless ability.

Doug Liman’s latest actioner steadies itself upon a promising premise and then never decides to jump off. Predictable characters, an overused (albeit cool) special effect, and countless unresolved conflicts keep Jumper from achieving greatness. The film ironically parallels David’s early proposition to Millie to “skip the boring parts” of their journey — but apparently it also skipped over anything that would have given the film enough substance to stay afloat.