“Ultimately the film is about faith, and the monsters are just a layer of horror placed over the morality tale to convince audiences that it is indeed a monster movie” 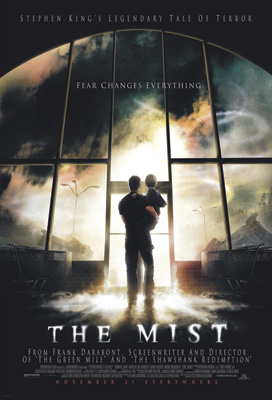 Frank Darabont’s drastically changed adaptation of Stephen King’s novella The Mist features interesting creatures, recycled characters and a sacrifice of satisfaction for unpredictability. The film is more than just a mindless monster movie, although the creatures are on display within the first half hour. Delving into social structures, morality, and a Lord of the Flies coup of religion, The Mist attempts to make the audience think, and yet much of the all-too-familiar story feels forced and unsatisfactory for those whose main goal is simply to be entertained.

After a vicious storm, David (Thomas Jane) and his son Billy (Nathan Gamble) head into town for supplies, but find themselves trapped in a supermarket as a thick fog engulfs the land. When the mist produces several hellish monstrosities and people begin to die, the survivors split apart into multiple factions to determine the wisest way to escape their horrifying predicament.

The Mist draws many parallels (or perhaps steals) from other films including The Poseidon Adventure, in which a group of survivors must debate on whether to seek escape or merely wait for rescue. Additionally, Lord of the Flies immediately comes to mind, since the religious fanatic attempts to create a monarchy amongst the group, and then decides that human sacrifices are necessary to keep the creatures at bay. Hints of the reasoning and thought processes from characters in Rosemary’s Baby also surface, especially when David contemplates acting on decisions he would presumably never make.

Initially evoking concern about poisonous gas or some other understandable predicament, The Mist gives away its secret right off the bat. We are immediately subjected to the horrors of a tentacled beast and are then left to wonder why the monstrous insect-like creatures don’t simply barge through the flimsy windows of the grocery store. It’s a great setting for chaos, and with fast zooms and handheld movements, such calamity is quite well depicted. But ultimately the film is about faith, and the monsters are just a layer of horror placed over the morality tale to convince audiences that it is indeed a monster movie. Marcia Gay Harden’s character has too much faith — to the point that she insanely proclaims herself as the chosen one from God, and David, on the opposite side of the spectrum, has too little faith — in the end we are made aware of that insufficient balance that belies tragedy for all involved.

While the most evil beings in the Mist may not be the aliens, great care is taken to present several uniquely terrifying monsters, most borrowing features from common phobia beasts. The flying insects and larger pterodactyls all sport top notch digital effects and their interaction with the environment cements their believable existence. Spiderlike creatures provide more gore than realism but the CG never falters. The largest beasts receive the smallest screentime and are truly awesome, though they would feel right at home in Spielberg’s War of the Worlds. Perhaps the weakest monstrosity visually is also the one shown first, a truly massive squidlike abomination. Adding to the inventive array of mysterious lifeforms populating the mist are their respective methods of attack, from stinging and biting to eating away from within. Voracious tentacles and acid web-spewing mark a few of the creative highlights that decidedly heighten the already violent display of carnage.

Despite the sacrifice of closure for unpredictability in its resolution, Darabont’s fourth adaptation of a Stephen King story manages to astonish and entertain as a horror film, but doesn’t fare nearly as well in its examination of the degradation of humanity under adverse situations. It’s a shame the film focused more on the latter, and while originality has its virtues, denying the audience any glimmer of hope is just as mystifying as the origins of the nightmarish creatures in the fog.