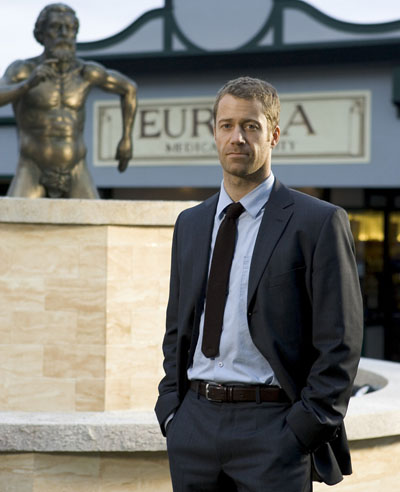 On this week’s Slice of SciFi show #119 we have as our special guest, actor Colin Ferguson who plays Sheriff Jack Carter on the hit SCI FI Channel show “Eureka,” seen every Tuesday at 9/8C.

Ferguson was born in Montreal, Canada but grew up in Toronto, Hong Kong, England and the State of Connecticut in the United States. Having moved a great deal, needing to constantly make new friends and having worked in a variety of occupations actually prepared him for the actor’s life in that it made him ready for sudden changes in his fortune and a good eye for opportunity.

Before landing this successful gig at SCI FI, his resume’ was already very impressive. Colin was a member of the Montreal improv group On The Spot, as well as a founding member of The Second City in Detroit. He has worked on both sides of the camera and his feature-film credits include the Universal movie “Because I Said So” with Diane Keaton, the 1996 Olympic flick “Rowing Through,” the very funny “The Opposite of Sex” with Christina Ricci and Lisa Kudrow and many more. He was a regular on the NBC remake of the hit British comedy series “Coupling” and the ABC sitcom “Then Came You.” You also have seen him guest starring on many television shows such as “Malcolm in the Middle,” “Crossing Jordan,” “Becker” and “CSI: Miami.”

Mike and Summer had a real blast talking with Colin as he shared the fun of working with his fellow cast members on “Eureka” and the three of them had such a good time that they actually ran out of time before he could drop some juicy tidbits about what to expect from future episodes. Don’t be too disappointed though because their exciting conversation will keep you glued to your seat and leave you wanting more.

It’s a case of good news/bad news for the SCI FI Channel as it relates to ratings. Eureka goes through the roof while Doctor Who disappoints. — The new Transformers video game is getting good reviews from gamers and critics alike. — More recognition comes to “Heroes,” this time from the Television Critics Association.

In some Matt Damon news, he returns as the unstoppable and uncatchable CIA-trained assassin Jason Bourne for the third film in the franchise with “The Bourne Ultimatum.”

On August 10th you may, for the first time in your life, find out what it really means to be a child again and scared half out of your wits with the debut of the tantalizing horror flick “Skinwalkers.”

Hey everybody! Doug Kress is back with three new trivia clips that will leave you going hmmmmm, but in a very entertaining way. Slice of Trivia returns.

Because of the recent tragedy at the Virginia Tech campus earlier this year Fox has decided to reshoot and cut some of its more graphic scenes shot at a high school that John Connor attends for the new SF thriller “The Sarah Connor Chronicles.”

CBS will introduce another new SF/fantasy drama from famed director Barry Sonnenfeld. It is called “Kingdom” and comes from the pen of “Tru Calling” scribe Chad Hodge.

We have two films coming out on the same day, September 26, 2008, but they are as different as night and day.

The first is a family-oriented film starring Eddie Murphy about imagination and possibility. It is titled “Nowwhereland.”

The second will be a film that won’t be as family-friendly as Murphy’s entry. The Roger Corman remake of “Death Race 2000” will finally hit the big screen and stars fan favorite Jason Statham. “Death Race,” will be directed by “AVP” and “Resident Evil’s” Paul W.S. Anderson.

We also are still running our “Dark Crystal Soundtrack CD” contest until midnight August 3rd. Go to the contest link found in the upper left-hand corner of this website for details.

Be sure to tune in to the show, either on the Web here at Slice of SciFi, by feed from your favorite podcatcher, XM Satellite’s Sonic Channel, or, if you live on the West Coast in the Napa Valley on KVON FM. However you receive the show be sure to listen this week for all the news and happenings in the scifi community and our great fun-filled interview with actor Colin Ferguson.