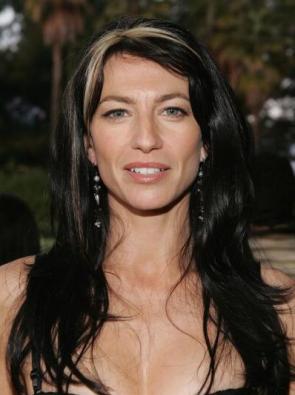 Claudia Black has been an actress on great SF television series’ such as the highly acclaimed “Farscape” where she portrayed Aeryn Sun opposite Ben Browder and a ship full of assorted aliens. After “Farscape” ran its course she returned to the role of Sun in the tele-film “Farscape: The Peacekeeper Wars.” She went on to star in the longest running SF television show in American TV history as Vala Mal Doran on “Stargate-SG-1,” again teaming up with her old cast mate Ben Browder. She joined SG-1 team regulars Amanda Tapping, Christopher Judge and Michael Shanks for 29 episodes until the series finale earlier this year. Claudia is currently shooting two made-for-DVD Stargate films which will continue the series in that format.

Black’s movie career has ranged from SF to drama to comedy. She starred as Pandora in the Anne Rice feature film Queen of the Damned alongside Aaliyah and Stuart Townsend, and in the SF hit movie Pitch Black with Vin Diesel.

Claudia has appeared in many of Australia’s most popular TV series and movies as Jill Mayhewâ€ in â€œGood Guys Bad Guysâ€, and the leading role of Angela Kostapas in “City Life.” She also appeared in the series â€œG.P.â€, â€œPolice Rescueâ€, â€œA Country Practiceâ€, â€œWater Ratsâ€, and â€œSeven Deadly Sinsâ€ in addition to several guest star appearances on â€œHerculesâ€ and â€œBeastmasterâ€.

Claudia received Britain’s SFX Magazine Award for Sexiest Actress on Television, and was one of Entertainment Weekly’s 2002 “IT” girls.

Our intrepid Slice of SciFi interviewer Linda Craddock, caught up with Claudia and was able to get the beautiful and talented actress of film and television to answer some questions for our fans.

Linda Craddock (SoSF): You have been nominated several times and won a Saturn Award for your role in Farscape as well as a nomination for Best Supporting Actress in Stargate SG-1. You are obviously a gifted actress. What can we expect from your character Vala Mal Doran in the Stargate movie Continuum?

Claudia Black (CB): Ah nice compliment at start of interview. Good tactic: butter-up your interviewee (smiles). Continuum is not a Vala-centric piece so both I and the Vala haters sigh with relief on that one. She is a high energy character to say the least and as much as I love to work and play her, it is great to sometimes add a flash of colour and go home. I also play another character in Continuum which was great fun. Short but also sweet. I loved Brad’s script and what he gave me to do.

SoSF: Vala is very complicated but she has won the trust of her SG-1 team members even though she still has a very unconventional approach to problem resolution. Will we see that aspect of the character in the movie?

(CB): I think they are aware of her strengths and moral limitations and keep her on a leash for the sake of national security and damage control while trying to capitalize on her resourcefulness in the meantime. She is not part of the team out of pity. She certainly has proved more than useful. In Continuum we see a hint of that give and take but she really only makes a brief appearance in this one.

SoSF: Will this be a spin off from the end of SG-1’s 10th season storyline?

CB: I am not sure I understand the question. Arc of Truth written by Robert Cooper ties up the lose threads of season ten where the Ori are concerned whereas Continuum is a stand alone piece. However, some guest actors who have appeared on the series before reprise their roles in Contiuum.

SoSF: When you were presented with the script for the movie, were you immediately excited about the storyline and how did you think the fans would respond with end of SG-1’s 10 year run?

CB: As I said above I loved Brad’s script and was looking forward to being included in it. I was sad for the lead cast who had been there from day one and for the fans who were instrumental in the show’s success. But it is such a highly visible show and heavily syndicated certainly where I have traveled around the world so I think it will not be lost and quite easy to find if fans are having withdrawals. And the beauty of DVD is that they can chose which episodes or seasons to re-watch and skip others. (yes you, Vala haters! — smiles)

SoSF: I understand the movie will be one of two which will go direct to DVD when released. What is the idea behind that versus appearing on the big screen?

CB: That is a question for the producers / MGM.

SoSF: Were you part of the cast that had to travel to the Arctic to film a portion of the film?

SoSF: The movie Ark of Truth will wrap up the two-year Ori saga which was unresolved due to the cancellation of SG1. Tell us your views on the stories ending!

CB: There are some nice little details that Tim Guinee and I were able to explore in the Vala-Tomin arc. I liked how that wrapped up. Or at least how it did on the day. Not sure what made the cut! In general the loose ends which we tie up seemed to be in keeping with the style / tone of the series: things wrap up as they need to in order to restore order.

SoSF: Morena Baccarin’s character Adria ascends in Dominion. Given the outcome of that particular episode, what can we expect from the character and her relationship with Vala in the Ark of Truth since the team is traveling to the Ori galaxy?

CB: I don’t know what to say without giving spoilers and I avidly avoid spoilers. But I think the writing was probably on the wall where Adria and Vala were concerned. No room for a grey area. So there are two ways things could go for them at story’s end; Happy families or see ya later…

SoSF: Between the two movies, do you have a favorite and what were some of the highlights in both movies?

CB: Highlights in both are for me about getting the Vala band back together. I got to see Tim, Morena, Michael etc. and have a laugh.

SoSF: How demanding was the schedule between the two movies? What was the most challenging aspect of shooting either movie?

CB: Arc of Truth as good as killed me. We did way more overtime than I ever have on the show before. Continuum I was outta there in just over a week.

SoSF: Is it safe to say you will continue to be a part of future Stargate movies?

CB: If real life was like our beloved Science Fiction, I would be able to tell you exactly what my future holds…

SoSF: You recently appeared in an episode on the Dresden Files. Talk about that experience.

CB: I loved the people working on it, on both sides of the camera. Loved going to a new city. Loathed being away from my husband and our son who of course took his first step the day after I left town. AAAGGGHHH!!!! Worked in an ice storm which was an experience. Found out that my “interesting” face truly became a face-for-radio-only in those weather conditions. I loved the Erin Brokovich spirit of the character and the giggles I had with the costume designer over the boobs belts and boots that became essential to Liz’s style.

SoSF: Like other SG-1 cast members, do you anticipate an appearance in any episode of Stargate: Atlantis in season 4?

CB: Not at this stage.

SoSF: You spoke of developing two TV shows and a film in an interview during the later part of 2006 which would take place in Australia? Any chance you will revisit that wish list?

CB: None were set in Australia. But I am still working on one of the concepts in particular and the others have not gone away. Just back burner for now.

SoSF: Claudia, thank you so much again for taking the time from your busy schedule for this interview.

CB: No problemo. Hope everyone reading this finds great tv shows about which they can become passionate now that a little opening has appeared on your schedules. (smiles)