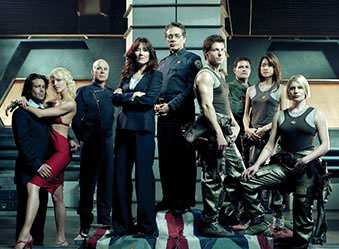 As we have been reporting now for about 5 days, executive producers Ronald D. Moore and David Eick have decided that season 4 of “Battlestar Galactica,” SCI FI Channel’s Peabody Award-winning original series, will be its last. They will use the 22-episode season, currently in production, to draw the saga of humanity’s struggle for survival to a close.

“We respect the producers’ decision to end the series and are proud to have been the home of this groundbreaking show. We have always known that Ron and David had a plan for ‘Galactica’ and trust that fans can look forward to a truly amazing final season,” stated Mark Stern, Executive Vice President of Original Programming, SCI FI.

Production on the final 22 hours of season 4 is currently underway in Vancouver. An extended two-hour episode, “Razor,” will premiere in November 2007, setting the stage for the rest of the season to commence in 2008.

Redefining the space opera with its gritty realism, Galactica’s intensity, issues-driven topicality, and command performances have garnered it unprecedented critical acclaim. In addition to winning a prestigious Peabody Award, the series has been honored as one of the 10 Outstanding Television Programs of the Year by the American Film Institute (AFI) for two years running and the #2 sci-fi project — television or film — of the past 25 years by Entertainment Weekly.

‘Battlestar’ is also responsible for adding to the lexicon of grammatical speech by introducing the expletive “frak” into the pop culture lingo.

About the SCI FI Channel:
SCI FI Channel is a television network where “what if” is what’s on. SCI FI fuels the imagination of viewers with original series and events, blockbuster movies and classic science fiction and fantasy programming, as well as a dynamic Web site, http://www.scifi.com, and magazine. Launched in 1992, and currently in 89 million homes, SCI FI Channel is a network of NBC Universal, one of the world’s leading media and entertainment companies.