This is a recap of Sunday night’s (Mar. 4) episode of “Battlestar Galactica” called ‘Maelstrom.’

This article contains spoilers, so if you haven’t seen the episode yet, you have been forewarned.

The show opens and we find Kara talking with Helo telling him how much she has been disturbed of late since he reminded her about the mandala she drew as a child that matched the ancient symbol found in the 4000 year old temple built by the 13th colony. She relates the nightmares she has been having about her so-called destiny and it has put her nerves on the ragged edge leading her to great psychological distress.

At Helo’s suggestion, Kara goes to see the fleet’s famous Oracle Yolanda Brenn, who tells her that a Cylon from her past and her mother, now long dead, are still trying to reveal to her a destiny she is afraid to face.

Galactica and the fleet are in great need of refueling now that the energy ship from last week’s episode is up and producing fuel again. The fleet has taken cover around a planet that emits a sufficient amount of radiation to hide them from Cylon sensors. The only problem is Galactica’s sensors are also affected by the radiation and have limited capability. The fleet must risk their best Viper pilots to do fly-by security while the refueling takes place. 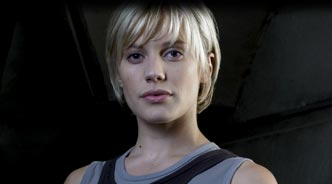 Despite the fact that Lee “Apollo” Adama knows his best pilot, Kara “Starbuck” Thrace is both mentally and emotionally burnt-out, he nevertheless sends her out in her Viper to patrol for any Cylon raiders that may be lurking about. On two separate occasions Kara spots a raider that no one else can detect or visually see.

All of this space action is interspersed with flashback scenes about her past growing up with a hardened mother, a fleet Marine, and the time she spent on New Caprica with the Cylon Leoben Conoy. Each of these past episodes, while heart-wrenching for Kara, are preparing her for that dreaded destiny that awaits her.

On her second attempt to shoot down the Cylon ship, she speeds far too close to the planet’s atmospheric basement, ignites the surrounding atmosphere with her after-burners as Lee, in hot pursuit to save her, watches in sheer disbelief and helplessness as Kara and her Viper are incinerated.

The one thing you can say about Ron Moore and David Eick is, like Joss Whedon, they are not afraid to put their main characters, those that help drive the production to the success it has, in severe situations that will totally eliminate them… or, is she really gone for good?

The great question on whether or not Kara Thrace is a Cylon and possibly one of the Final Five may finally get answered… Stay tuned!