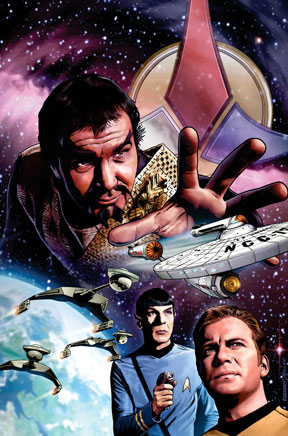 San Diego, CA — While Starfleet personnel of the 24th century view Klingons as their allies, in the Star Trek universe of Captain Kirk’s time, the Klingons were always viewed as being on the wrong side of their struggles with the United Federation of Planets. As a species, they were allegedly responsible for some reprehensible acts (resulting in some classic TV episodes and movies), but were they really in the wrong? Or did they just not have a fair chance to present their side of the story?

Starting in April, they’ll get their chance. “Star Trek: Klingons: Blood Will Tell” is a new, five-part miniseries that will finally give the Klingons their due. In this special miniseries, we will see five historic Federation-Klingon incidents revisited through the eyes of the Klingon people. After this miniseries, you may never be able to look at episodes like “A Private Little War” or “The Trouble with Tribbles” in the same way again. These stories, viewed from the Klingon perspective, will explain much more of why the Klingon Empire functions the way it does.

“Star Trek: Klingons: Blood Will Tell” features the pairing of the “Angel: Auld Lang Syne” creative team of writer Scott Tipton (here aided by his brother, David Tipton) and artist David Messina. The first issue centers on an unsteady peace that breaks into full-scale war after a Klingon cruiser is destroyed by the Federation Starship Enterprise. And issue two will, at long last, examine the result of Montgomery Scott’s beaming of thousands of tribbles onto a Klingon cruiser. Artist Joe Corroney (24: Nightfall) will join Messina in providing variant covers for this series.

To herald this special event a bit more, the first issue of “Star Trek: Klingons: Blood Will Tell” will be offered with a unique variant; the issue will be available in a standard edition or in a special 40-page Klingon Language Edition, accompanied by the original script in English to aid translation.

ABOUT IDW PUBLISHING
IDW PUBLISHING is a division of Idea and Design Works, LLC, a revolutionary creative service company with a wide range of clients. Among their best-selling titles are Hasbro’s THE TRANSFORMERS, Fox’s ANGEL, Konami’s METAL GEAR SOLID, and FALLEN ANGEL. IDW’s 30 DAYS OF NIGHT film is in development and will be released by Sony Pictures in October 2007. IDW has films in development at Dimension Films and Paramount Pictures, as well.

ABOUT CBS CONSUMER PRODUCTS
CBS Consumer Products, a unit of CBS Entertainment, manages worldwide licensing and merchandising for a diverse slate of television brands and series from CBS, CBS Paramount Network Television and CBS Television Distribution, as well as from the company’s extensive library of titles. Additionally, the group oversees the CBS Retail Store and online sales of programming merchandise. For more information, visit www.CBS.com.