The Hugo Award winning “A Song of Ice and Fire” is one of George R.R. Martin’s greatest works and a bestselling fantasy series. HBO has decided to turn the set of stories into a cable dramatic series. 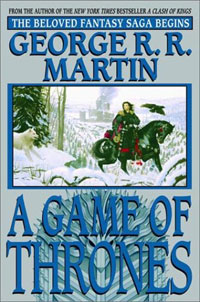 Taking on the screenwriting and producing duties are David Benioff (Troy, Wolverine) and D.B. Weiss (Halo). Benioff and Weiss will do most of the writing chores, but Martin himself (who will also co-produce) has signed on to do at least one episode of season one. More from him could be in the offing for future episodes.

Martin is still writing the fifth book and hopes to have the seventh and final book in the series completed within the next five years. So, if successful, the HBO weekly series of “Ice and Firee” could go on for at least a decade.

Martin’s “Ice and Fire” storylines fit well into HBO’s more adult-oriented audience which has seen the success of other adult features as “The Sopranos,” “Six Feet Under,” “Deadwood” and the highly acclaimed “Rome.”

While being slightly Tolkien-esque in its delivery, Martin’s epic storytelling centers around the flawed characters from seven medieval noble families and their many battles and campaigns in the midst of magic and prophetic utterances. Being adult in nature, the novels, and, no-doubt, the upcoming weekly series, have its fair share of sex, violence and bloodshed.

“They tried for 50 years to make ‘Lord of the Rings’ as one movie before Peter Jackson found success making three,” Martin said. “My books are bigger and more complicated, and would require 18 movies. Otherwise, you’d have to choose one or two characters.”

Something as complicted and prolonged as ‘Ice and Fire’ makes for an excellent weekly vehicle on a network like HBO.