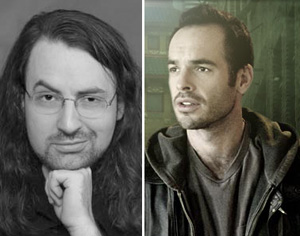 Movie Talk: Dragonlance: Dragons of Autumn Twilight is the fully animated adaptation of Margaret Weis and Tracy Hickman’s classic fantasy novel, “Dragons of Autumn Twilight”, the first in the Dragonlance saga. Both Weis and Hickman will be involved with the screenplay with George Strayton, and animator and two-time Emmy nominee Will Meugniot will be directing for Paramount Studios.

There will be over 20 different voice actors employed for this epic production, including such stars as Kiefer Sutherland (24), Lucy Lawless (Xena, Warrior Princess, Battlestar Galactica), Michael Rosenbaum (Smallville), Jason Marsden (Xiaolin Showdown) and Michelle Trachtenberg (Six Feet Under), just to name a few.

TV Talk: The basic premise of the young adult novel, “Midnighters: The Secret Hour” by Scott Westerfield, is that if you were born at the stroke of midnight then you may be one of a rare breed of people that has a 25-hour day. For them, there is a secret 25th hour that occurs every day at the stroke of midnight. For one full hour, while the rest of us are frozen in time, a whole other world of reality exists where a select few whose birthdays occur on midnight are free to roam around this time-frozen world and interact with it.

Currently Warner Bros. TV is taking a hard look at the project and Kern is waiting for the call to push it forward.

Interview: Author Jim Butcher joins Michael and Summer to talk about not only his “Dresden Files” series and “Codex Alera” fantasy series, but tells us what he knows about SciFi Channel’s upcoming TV series adaptation of The Dresden Files, starring Paul Blackthorne as the modern-day wizard investigator, Harry Dresden. Check out SciFi Channel’s “Dresden Files” website, and the promo video currently online. The series is slated to premiere in January 2007.

Future Talk: What’s Coming Up? “Tonight, He Comes” is a film that has taken a long time to get off the ground. This Will Smith SF vehicle finally begins shooting in May 2007 for a summer 2008 release with Charlize Theron (currently in talks) is now favored to star as the female lead.

“Tonight, He Comes” is about a superhero that is not all that his public image is cracked-up to be. Smith’s lead character can best be described as a superhero in existential crisis.