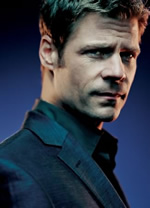 MovieTalk:
Walter Koenig will be unveiling the Star Trek: New Voyages episode “The Serve All My Days” at the Star Trek 40th Anniversary Gala on September 8, 2006 at the Science Fiction Museum and Hall of Fame in Seattle.

TV Talk:
The “Eureka” that aired on SciFi Channel on July 18th, breaking a number of cable television records in the process, was nothing like the show’s original premise and direction.

Interview: Joel Gretsch, who portrays NTAC Special Agent Tom Baldwin on USA Network’s hit series The 4400, takes some time out of his day to tell us about landing a second high profile scifi role and the fun he’s having on the show, about being William Shatner’s son-in-law, and more.

Future Talk: What’s Coming Up?
Jeremy Bolt and Paul Anderson have yet another video game adaptation in the works, this time bringing us D.O.A: Dead or Alive. The fight scenes were choreographed under the close supervision of Corey Yuen, and the movie features Eric Roberts, Devon Aoki, Brian J. Wright and heartthrob Jamie Pressly. It’s set to hit theaters on August 25, 2006

Podcasting News: We’re running the podcasting track at DragonCon, as well as running the Parsec Awards for Excellence in Podcasting. Check out DragonCon in 2006, and we hope you can make it!

Music: Please buy the music so we don’t get sued… why won’t the voice in my head STOP!!! Slippery When Wet by Bon Jovi | Evolution – The Hits by Dead or Alive