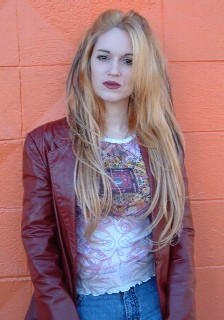 Lilith Stabs is a legendary B movie maiden, scream queen and self-proclaimed High Priestess of Horror. She slithers upon you like an undead serpent capturing your attention and not letting you go till she has milked you of your attention span. Naughty boys, you thought I was going to say something else didn’t you. When suddenly thrust into her presence you are consumed by fear and lust, or maybe it was the bad oysters, who knows. But one thing’s for sure, you won’t know whether to fall to your knees and pray to her or run like hell in the other direction screaming at the top of your lungs.

She has starred in some classic B movies including Exterminator City, Bad Movie Police Case #3: Humanoids from Atlantis, Malefic, Zombiegeddon and Vampire Call Girls. Other than maybe Julie Strain, there is no other actress I can think of that would simultaneously turn you on and terrify you in the same breath.

ML: Excluding Rob Zombie’s, The Devil’s Rejects which was an excellent horror flick by the way, do you think the Japanese horror movie community has surpassed their US counterparts in producing cutting edge horror films? Of late we seem to be doing remakes of original Japanese horror films like The Ring and Dark Water.

LS: Well, exactly that was going to be my response, that we here end up doing the remake version of the Japanese version. Maybe the film makers there are just a little more willing to take a risk on new ideas than the film makers here.

ML: You once stated that you got into acting late in life due to discouragement from your family. Did ever study acting formally?

LS: No, no real formal training except my first two marriages. I mostly did some modeling earlier in life but did not end up doing much with that. When I told my parents at the age five I wanted to act they just discouraged me. 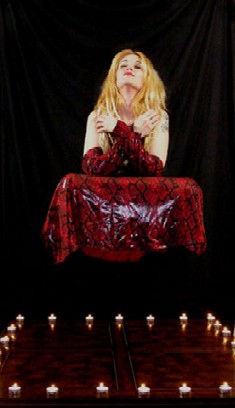 ML: What is your most favorite movie that you’ve acted in so far? Why?

LS: Well, I really don’t have a favorite, right now I would have to say its probably something I have not done yet. I feel that way because I feel I don’t always get roles that I could play to my fullest potential. Perhaps it’s just the b-movie industry itself.

ML: Are you comfortable with the title scream queen? Julie Strain has created an industry of sorts using that moniker.

LS: Indeed I am, even though I don’t do that much screaming myself. I prefer playing the more villainous roles but have nothing against the roles that would require me to scream.

ML: How did the Bad Movie Police Case movie series come about? Which one has been your favorite so far?

ML: Has your movie Deadly Stingers been released yet? I know there have been delays on top of delays. Oh and how did “Crimson Ambition” turn out? How is Vampybunny Productions shaping up?

LS: No. As far as I know Deadly Stingers has never ended up coming out. And due to money Crimson Ambition never got completed. And the Vampybunny Productions first project got scrapped when I had got arrested in Ohio. Due to financial issues several of my own projects end up getting scrapped or delayed due to this. It always seems like the wrong people on this planet have money. People who just waste it and don’t use it properly. If I had money I’d be dangerous. Who am I kidding, I may be broke but I’m still lethal.

LS: Well, it was my first movie. So I suppose that in and of itself made it fun, I also did my first convention appearance that weekend up in Pittsburgh, PA. at the Pittsburgh Comicon.

ML: So do you have any fetishes yourself that you would like to discuss? Any other taboos you’d like to confess here other than your undying love of rabbits?

LS: Hmmm….I have sort of, well actually a full blown boot fetish. I totally love them. And have more than I can count, they fill several closets. And of course other than that I got my two pet bunnies Serena and Samantha. Those who have met me at conventions know the bunnies as well since they attend.

ML: I saw a photo of you were you were wearing what appeared to be a Wiccan star. Do you practice the Craft?

LS: Well, I don’t really practice. I did study the craft in my early 20s. Those I know who practice, call me a natural witch. They mean I don’t really have to practice the craft or cast spells, I just have the power within me to make things happen.

ML: What was the concept of your movie Malefic? Any interesting stories to tell about the making of that movie?

LS: Well, kidnapping/blackmail but of course it was kind of justified. And according to some those are activities I know well. Not really. Anything interesting on the set, hmmm…well, we filmed tucked away in Mississippi cabin in the woods. And when we went to dinner the local police were rather interested in the cast of this movie and what we were doing in their town. So naturally when we left the restaurant we got pulled over for “improper lane change”. The guy driving did not have his license, there was alcohol bought at a store and an underage person was holding the bag, and the one guy who came with another actress had a gun on him. But then cops knew nothing about all that and let us go, I suppose they were just curious and wanted us to know we were being
watched.

ML: For that matter, do you have any interesting stories to tell about behind-the-scenes exploits on any of your past movie sets?

LS: Well, I think there are probably too many. From getting the worst cold I ever had after filming Bad Movie Police, to being accused of outrageous untrue things by a psychotic Ohio family, to filming under bad conditions (far too many sets to name).But most of the time it’s a lot of fun.

ML: Living in the South have you ever have any encounters with the multitude of fundamentalist Jesus freaks that inhabit the Bible Belt wasteland?

LS: Of course I did. Just their attitude that they think they can look at people and tell they are bad because of how they look is pathetic. I of course dealt with that plenty. But I have since recently relocated to the west Coast. I’m in the Los Angeles area now.

ML: Have you ever had the chance to work with Bruce Campbell?

LS: No, other than appearing at the same conventions a few times.

ML: Is London Night Studios still producing Razor Gothic? For those of you that don’t know, Lilith was a featured character in this comic book series.

LS: No, I really don’t know if they are still printing any new comics. And it was fun being featured in a comic book, my first bunny Cozy was in there with me. 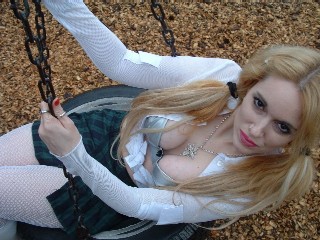 ML: You mentioned in a previous interview that you enjoy writing in your spare time. What do you write, screenplays, fiction?

ML: How’s you photography coming along these days? Have you had any gallery showings?

LS: The photography is going well, mostly just take photos for bands or model/actors. So just concentrating on that type of photo shoots I have not done and showings yet. Perhaps some time in the future.

ML: How’s your musical projects coming along? What kind of music do you listen to these days?

LS: Have not recorded anything new in years, but would not mind doing so if I found the right situation musically. I listen to all sorts of types music but mostly rock, pop and alternative.

I want to thank Lilith for taking the time to do this interview. For additional information visit her website at: http://www.lilithstabs.com

Hey Rob Zombie, for god’s sake man, hire this lovely woman for your movies! She would make a great blood sucking succubus or rotting corpse.

When next we meet up with Ms. Stabs we’ll be at the Burning Man festival joining her and onstage, for one night only, accompanying her and her go-go death metal band, Sexual Chocolate All Stars For Jesus as a backup guitarist. Wish me luck.

His webpage can be found at: http://www.internet.is/artist/writer/michael_lohr.htm