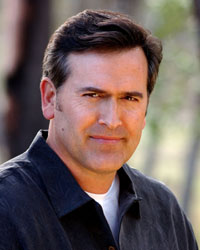 â€œDonâ€™t bloody mention anything about Evil Dead, got it?â€? Those were the first words I heard from his agent when requesting this email. â€œIâ€™ll answer any question, just nothing about Evil Dead,â€? Bruce responded when contacting me about doing the interview. For what ever reason the infamous horror film Evil Dead was off limits. Maybe it was for reasons of pending litigation, homeland security, or international intrigue but I agreed not to ever mention anything about Evil Dead. I pledged not to mention that it was Bruce Campbellâ€™s first starring role or that it was Sam Raimi and Robert Tapertâ€™s first cinematic directing debut.

Bruce Campbell is a notorious actor and I mean that in the most positive way. Hailing from the state of Michigan where he studied theatre at Western Michigan University and did commercials in Detroit, that wondrous example of urban decay, he soon left the gray, dingy skies of Michigan for the azure wasteland of Hollywood. Although I am not supposed to bring up Evil Dead, Bruce said he particularly liked Evil Dead II., of course he has also said that indie film Running Time, produced by Josh Becker was a personal favourite. I also found out that Bruce idolizes Steve McQueen. I can understand this adoration, McQueen was the grand duke of cool in my book, right up there with Hunter S. Thompson and James Dean.

If youâ€™re a movie buff or a big fan of Bruce Campbell then youâ€™ve probably seen Mr. Campbellâ€™s now legendary cameos in such blockbuster movies as Spiderman, Spiderman II, McHale’s Navy and the Evil Dead sequel, Army of Darkness. I know, I know McHale’s Navy was a horrible movie but it did well in the States DVD rental-wise. But did you know that Bruce also had cameos in such Coen Brothers-produced cult classics as Fargo and The Hudsucker Proxy? He also starred in such syndicated television series hits as Hercules: The Legendary Journeys and Xena: Warrior Princess. His New York Times bestselling book, If Chins Could Kill; Confessions of a B Movie Actor is a fascinating journey into the hectic and chaotic life of a person struggling to obtain their dreams. Bruce has even written a comic book, The Hire for Dark Horse Comics.

Oh and did I mention he was in all those Evil Dead movies?

BC: I’m not a saber rattler, but I also hate bad land stewardship. I’m working on a doco (thatâ€™s film industry slang for documentary folks) about the subject currently. Folks need to leave land in as good condition after they’ve used it. This should apply to industry and private landowners as a whole.

ML: You spoke about hiking and communing with nature, in particular an episode where you were hiking in southern Utah and remarked that it was so silent that you could hear a vultureâ€™s wings flapping as it flew across a canyon. Do you hike a lot and do spend a lot of time in nature? I bet you enjoyed working in New Zealand?

BC: I love the great outdoors. I live in Oregon, and it’s very peaceful here. Folks are pretty real as well. New Zealand was a fun place to work – especially before the Lord of the Rings days.

ML: Bubba Ho-Tep was an absolute hoot. One of my all-time favourite films. How did this movie come about and are there any plans for a sequel?

BC: No plans for a sequel, but Don Coscarelli put up the money himself for the film, so I knew that he was committed. Don considered me for the role after Sam Raimi casually suggested me.

ML: I heard it from some rather terribly unreliable sources that you are currently writing a popular culture rant book entitled Blister Shrimp Farming in the Florida Keys, Or What Not To Do When You Get Stung in the Testicles by a Man-O-War is this true?

BC: No. You need better sources 🙂

BC: I don’t really play the “favorite” game. I enjoy a lot of what I’ve done, and I’ve hated some of the stuff as well, but an actor has to act. You win some, you lose some.

ML: Have you ever been injured on the set while filming?

BC: Not enough to stop shooting. I was cut on the face during Army of Darkness, but it didn’t matter – I already had a dozen other ones.

ML: Excluding Rob Zombieâ€™s, The Devilâ€™s Rejects which was an excellent horror flick, do you think the Japanese horror movie makers has surpassed their US counterparts in producing cutting edge horror films? Of late we seem to be doing remakes of original Japanese horror films like The Ring and Dark Water.

BC: I’m tired of the Asian influence, personally. That style of horror is too “obtuse” to be scary. I like a straightforward, in your face horror flick with lots of carnage and mayhem.

ML: Do you read any horror or science fiction novels during your leisure time?

BC: When I’m not working, I’m on the hunt for news or recreation. The world of make believe surrounds me, so I have an appreciation for reality.

ML: Do you think that the surge of violent, gruesome crime shows like CSI, CSI Miami, Nip/Tuck and other such television shows have become the â€œnewâ€? horror of this era?

BC: I guess so, I don’t watch any of them. Cop, doctor and lawyer shows bore the piss out of me. I’m ready for something else.

ML: So tell us the truth, what was it like working with Lucy Lawless? Any interesting stories that come to mind that you can share with us?

BC: They are all interesting to me, but they have limited value off the set. I enjoyed working with Lucy because she was usually chipper, very hard-working and always professional. What more could you ask for?

And donâ€™t forget Bruce has a new book out, a tongue in cheek novel entitled Make Love The Bruce Campbell Way. Itâ€™s a hilarious and scorching romp through La-La Land, and a story that could only be told by the High Druid of B Movies.

I would like to thank Bruce for taking time to be interviewed. When next we meet up with Bruce Campbell, weâ€™ll be in Miami at the Iron Sheik Professional Wrestling School training to be the next WWE bad-guy Tag Team Champions, the Utah Saints, Yo and Ho, the Yard Gnome Tossing Champions of the Dislocated Universe.