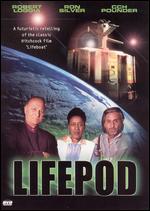 In 1993 actor and political activist Ron Silver starred in and made his directorial debut with a little TV movie feature called Lifepod.

Taking his que from Alfred Hitchcock’s psychological thriller Lifeboat, Silver brings the 1944 WWII classic about 6 men and 6 women survivors aboard a lifeboat after their ship is torpedoed, up to the space-age.

Lifepod follows the lives of 8 passengers forced to face the harshness of outer space within the confines of the only successfully jettisoned lifepod from an exploding luxury spaceliner. When one by one the lifepod survivors start getting ill and or murdered it becomes apparent that at least one of them is an assassin.

If you haven’t yet seen it, rent it. This is pretty good scifi viewing. More drama than special effects, but Silver is highly effective in allowing the viewer to feel the anquish shared by all the survivors as well as their fears and frustration.