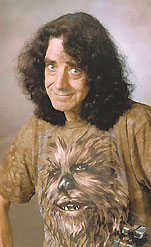 This week, Peter Mayhew drops by to talk about portraying Chewbacca over the past 28 years.

Movie Talk: A new biopic on the life of James Bond creator Ian Fleming is in production, with a freshly written script all ready to go

TV Talk: The SciFi Channel is moving ahead with a Savage Planet movie, based on a remake of the 1973 French animated film, La Planete Sauvage

What’s On Out There? A new BBC series called Torchwood is in the works, as an “sexy, funny, adult” spin-off of Doctor Who