NASA Astronauts Mike Fincke and Terry Virts recently suited up for a voyage in “space” without ever leaving Earth. In fact, their most recent space expedition was in Hollywood.

Instead of a countdown, their launch began on “lights, camera, and action!”

While on vacation, the real-life space explorers traded in their spacesuits for make-believe future space garb as the two made a guest appearance on the series finale of the science fiction television series “Star Trek: Enterprise.” 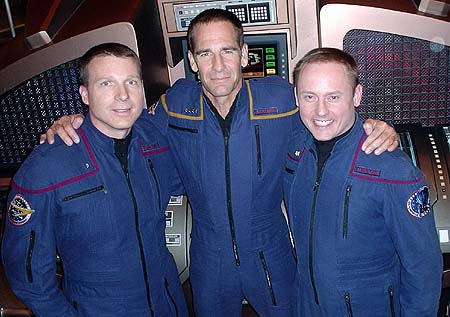 Scott Bakula, whose character on the show ï¿½ Captain Archer ï¿½ commands the starship Enterprise, had a chance to chat long-distance with Fincke, Expedition 9 flight engineer, while in orbit last year. Fincke viewed several episodes of the show while flying more than 200 miles above Earth during his stay on the Station.

Bakula also participated in an interactive feature on the Shuttle’s Return to Flight.

With both feet back on the ground, Fincke and Virts were given an opportunity to perform among actors who take on their roles as space explorers on the screen. The astronauts play engineers of the 22nd century for the day, performing maintenance in an engine room aboard Enterprise NX-01.

“It was neat to see the magic of Hollywood make something cardboard and plastic look real,” Fincke said. “I’ve spent my whole career learning switches and buttons. On the set, none of the switches or buttons does anything.”

“This was my first time on a prime time TV show, and after seeing how talented the actors are, I think I will keep my day job,” Virts said.

Fincke and Virts said, however, that science fiction like “Star Trek” and other tales of deep space travel captured their interest as children and influenced their careers.

“As a kid, I became interested in shows like the original Star Trek series and the first Star Trek feature movies,” Virts said. “They definitely had an impact in motivating me to a career with NASA.”

For decades, space has been a place of fantasy and reality. Both are tied by a common thread: the desire to explore uncharted territory.

“There’s always been a link between science fiction and science fact,” Fincke said. “Science fiction, in general, has inspired not just Astronauts but all humans by giving form to our dreams to explore,”

Although some science fiction may seem out of this world, fiction has at times foretold the future, including the ingenuity and drama of space exploration.

Fincke, who lived in space for six months aboard the International Space Station last year, experienced firsthand science and technology at work in space.

During the mission, his schedule was full of scientific studies, including experiments in life and material sciences. While in space, Fincke led research aimed to learn more on how humans react in space, the effects of long-term weightlessness and how to counter those effects.

Fincke and ISS Commander Gennady Padalka took part in three spacewalks to repair the Station and ready it for future construction. Fincke also photographed from space an alphabet of hurricanes that stormed Earthï¿½s oceans.

Today, the space frontier is expanding, and like the setting of “Star Trek: Enterprise,” the nation’s Vision for Space Exploration is at the brink of the early pioneering days of deep space exploration.

“It was interesting and fun to get a glimpse of how it’s done in Hollywood, but there’s nothing like the real thing,” Fincke said.